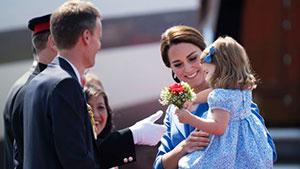 There are certain firsts every toddler goes through: first words, first successful trip to the loo.

But, if you’re a toddler whose life’s destiny as a state representative has already been determined by an archaic governance structure based on birth right, there’s another first you probably need to master sometime between your terrible twos and thundering threes: first handshake with a member of a foreign delegation.

Princess Charlotte, two, got hers out of the way upon arrival in Germany on Wednesday.

The royal toddler, who is fourth in line to the British throne, fronted up to Berlin Tegel airport with her parents, Prince William and Catherine, the Duchess of Cambridge, and older brother, Prince George.

After being given a small bouquet of flowers to match the larger one given to her mother, the young princess showed she is, frankly, more than capable of doing these interstate visits solo by shaking hands with the welcoming party on the tarmac.

The diplomatic handshake is a skill George has had mastered for a year or so now.

The preschooler, who turns four on Saturday, was photographed meeting then US president Barack Obama when he arrived at Kensington Palace in 2016. George shook the tall man’s hand, seemingly unfazed by the fact that he was wearing pyjamas (it was reportedly 15 minutes after his bed time).

But George seemed less keen to forgo sleep on Wednesday, looking quite tired as he stepped off the plane.

Dressed smartly in a collared shirt and dress shorts, the young prince seemed to be struggling to stand upright after the flight, repeatedly rubbing his eyes and yawning while his little sister lapped up the attention. He did, however, manage to find the energy to also shake hands with members of the German welcoming committee.

Prince William and Catherine, the Duchess of Cambridge, have taken their two children on an official tour of Poland and Germany.

The family will spend a total of five days in the two countries. After previously visiting Warsaw and Gdansk, they flew into Germany on Wednesday where they will spend time in Berlin, Heidelberg and Hamburg.