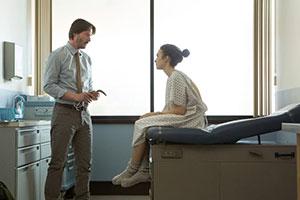 By TALYA MINSBERG- The New York Times
When Marti Noxon set out to make “To the Bone,” a film about a 20-year-old battling an eating disorder, she initially faced the question: Was the topic too niche?

The answer came in the form of a rousing premiere in January at the Sundance Film Festival, Netflix’s reported $8 million purchase of the film, a trailer that went viral with 54 million views in the first week and arguments over whether it glamorized excessive thinness. The film debuted on Netflix on Friday.
The film is loosely based on Ms. Noxon’s experience with an eating disorder. She and its star, Lily Collins, are among the 30 million Americans — a third of them men — who have struggled with one. Ms. Collins plays Ellen, an anorexia patient who enters her fifth eating disorder treatment center, an unorthodox group home run by a doctor played by Keanu Reeves.
Many of those reacting to the film’s trailer worried that watching it could trigger unhealthy thoughts in viewers who may be prone to eating disorders or already struggling with them. Indeed, some experts said that people who have had eating disorders should consider the state of their health before watching the film.