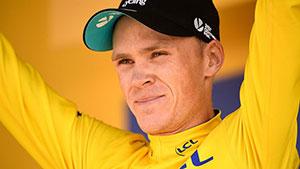 Primoz Roglic won stage 17 of the Tour de France to Serre-Chevalier as Chris Froome finished third to retain the yellow jersey.
Slovenian Roglic led by 90 seconds at the top of the Galibier and the former junior world ski jump champion showed no fear on the long fast descent to the finish to win by 73 seconds.