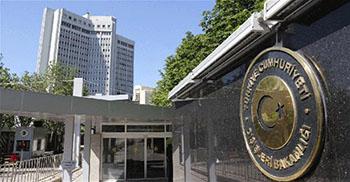 Comments by German officials regarding Turkey’s arrest of six human rights activists, including a German citizen, were unacceptable and amounted to interference in the judiciary, the Turkish Foreign Ministry said on July 20.

Germany raised the possibility on July 19 of suspending European Union aid payments to Turkey after summoning Ankara’s ambassador to Berlin to protest over the arrest of the six, including Amnesty International’s Turkey head İdil Eser.

German citizen Peter Steudtner was also among those jailed pending trial on terrorism charges, which Berlin has labelled “absurd”, in a move which further escalated tensions between the NATO allies.

“The comments again show the double standards in their approach to the law of those who prevent terrorists being brought to justice while embracing members of terrorist groups which target our country,” the ministry said.