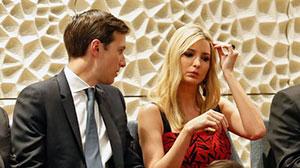 Mr Kusher is one of several White House insiders who are being asked to testify about the Trump presidential campaign’s dealings with Russian operatives. Donald Trump jnr and former Trump campaign manager Paul Manafort have also been asked to testify on July 26 in front of the Senate Judiciary Committee, according to the committee’s website.

The hearing comes after revelations of a previously undisclosed meeting last year in which Mr Trump jnr, Mr Manafort and Mr Kushner met with a Russian lawyer from whom Mr Trump jnr hoped to get incriminating information about Hillary Clinton. The committee is also investigating Mr Manafort’s lobbying and business ties.

The lawyer, Natalia Veselnitskaya, also said on Wednesday she was ready to testify before the US Senate and “clarify the situation”.

Mr Trump jnr released emails showing that British publicist Rob Goldstone proposed the meeting, promising “information that would incriminate Hillary” that is “part of Russia and its government’s support for Mr. Trump”.

President Trump has repeatedly denied that members of his campaign team colluded with Russia in last year’s election. US intelligence agencies said they have evidence Russia was behind a sophisticated effort to tilt the election in Mr Trump’s favour.

Mr Kushner is scheduled to be interviewed next Monday by Senate investigators, his lawyer Abbe Lowell said in an emailed statement.

“Working with and being responsive to the schedules of the committees, we have arranged Mr. Kushner’s interview with the Senate for July 24,” Mr Lowell said in a statement. “He will continue to cooperate and appreciates the opportunity to assist in putting this matter to rest.”

Mr Manafort’s spokesman Jason Maloni said Mr Manafort and his lawyers were reviewing a letter from the committee and wouldn’t comment further.

However, the US Senate judiciary committee has said it will issue sub-poenas, if necessary, to obtain information from Mr Manafort and Mr Trump jnr.

​Senator Sheldon Whitehouse, a Democratic member of the Judiciary Committee, said the hearing would enable the panel to begin to get testimony under oath.

“There has been an enormous amount that has been said publicly but it’s not under oath, which means that people are free to omit matters or lie with relative impunity,” Senator Whitehouse told CNN.

Ms Veselnitskaya told the Kremlin-funded RT television: “I am ready to clarify the situation behind the mass hysteria but only through lawyers or testifying in the Senate.”

“If the Senate wishes to hear the real story, I will be happy to speak up and share everything I wanted to tell Mr Trump,” she said.

That appeared to be a reference to Ms Veselnitskaya’s previous statement the meeting with Trump jnr focused on US-Russian adoption policies and a US sanctions law.

Ms Veselnitskaya has denied working for the Russian government.

In June, Mr Manafort filed a registration document with the US government saying he had received $US17.1 million for his work with a Ukrainian political party.

He registered with the US Justice Department under the Foreign Agents Registration Act, which requires people to disclose any political or quasi-political work they do for foreign entities. Mr Manafort’s filing covered his work on behalf of Ukraine’s pro-Russian Party of Regions between 2012 and 2013.