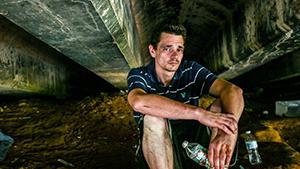 By Joel Gunter BBC News, Philadelphia
In a corner of Philadelphia known locally as the Badlands, where some of the purest heroin in the country can be bought for just $5 a bag, a half-mile stretch of rail track has become a refuge for hundreds of heroin addicts. Next week the city will begin to clear out the tracks, but where will the users go?