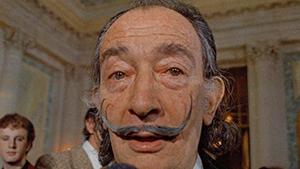 A statement by Catalonia’s high court confirming the extractions didn’t say which parts of Dali’s remains provided the samples. The Justice department for the northeastern Spanish region had previously announced plans to extract four teeth, nails and the marrow of a long bone.
Pilar Abel, a 61-year-old tarot card reader, claims she is the offspring of an affair her mother had with Dali — considered one of the fathers of surrealist art — while she was working as a domestic helper in the northeastern Spanish town of Figueres, where the artist was born and where he had moved back to with his Russian wife Gala.
Last month, a Madrid judge granted Abel’s request for a DNA test after two decades of court battles. If Abel is found to be Dali’s daughter, she could seek one-fourth of Dali’s estate in further lawsuits, in accordance with Catalonian inheritance laws.
“I am amazed and very happy because justice may be delivered,” she told The Associated Press at the time, adding that a desire to honor her mother’s memory was motivating her paternity lawsuit. “I have fought a long time for this and I think I have the right to know.”
Earlier Thursday, technicials removed a heavy stone slab that gave access to the crypt with Dali’s tomb. A small committee of five people oversaw the opening of the coffin and the removal of biological samples for genetic study. This process took one hour and 20 minutes, officials said.
The samples will now travel to a forensic lab in Madrid, where an analysis could take weeks.
Dali and his wife had no children of their own although Gala — whose name at birth was Elena Ivanovna Diakonova and who died seven years before the painter — had a daughter from an earlier marriage to French poet Paul Eluard.
Upon his death in 1989 at the age of 84, Dali bestowed his estate to the Spanish state. His body was buried in his hometown’s local theatre, which had been rebuilt to honor the artist in the 1960s. The building now hosts the Dali Theater Museum.
The public foundation that manages Dali’s estate failed to halt the exhumation but convinced the judge to reschedule it outside visiting hours. Extra measures have been taken to avoid any imagery of the process, including covering the museum’s glass dome to avoid any possible photography or video taken by drones.
Dali’s paternity lawsuit was a topic of discussion Thursday among the lines of visitors at the museum.
“I think that the woman has the right to know who her father is,” said 33 year-old Miguel Naranjo. “But I think it is surreal that they have to unearth his body after such a long time.”
The Associated Press contributed to this report.