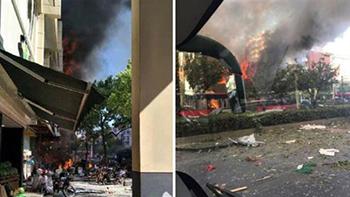 A gas canister explosion tore through a restaurant in the eastern Chinese city of Hangzhou on Friday, killing two people and injuring 55, local authorities said.

The explosion occurred Friday morning, and images posted on Chinese media shortly afterward showed bloodied victims nursing their injuries in the aftermath as a fire raged through the two-story structure housing the restaurant.
The number of the injured, 12 of whom were in serious condition, was increased because the blast shattered the windows of nearby vehicles, including a bus, the government of Hangzhou’s Xihu district said in a statement.
Reports said the fire was eventually contained after 12 fire trucks converged on the scene.
Hangzhou attracts millions of tourists each year, drawn by the scenic beauty of its temples and lakefront location.
(Source: AFP)