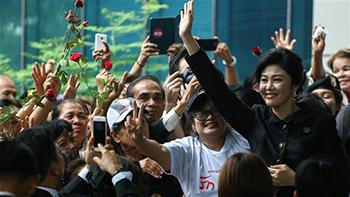 Former Thai prime pinister Yingluck Shinawatra has met with her supporters as she arrived to attend a final court hearing in the capital, Bangkok.
Shinawatra received supportive remarks and flowers from the crowd as she entered the Supreme Court on Friday.
Many of her supporters were teary-eyed as they gave her the flowers.

“I think she is being bullied, that’s my opinion. She’s been bullied more so than anything else,” said one supporter.
Some supporters held balloons with messages expressing love and calling for justice and a fair trial.
“I hope (the legal process) will be truthful to the people. I hope the court will be fair to all sides and take the unbiased path. The people out here also want just the truth and justice,” said another of supporter.
The Friday session is the last witness hearing of a lengthy trial on the charge that, as prime minister, Shinawatra mismanaged a multi-billion dollar rice subsidy scheme. Shinawatra, who was impeached and removed from office for abuse of power in 2014, faces up to 10 years in jail if found guilty of negligence over her role in the rice program.
She claims her trial is politically motivated and aimed at discrediting her and her party’s nationalist policies, which had helped the Shinawatra family win every election since 2001 until 2014.
Three witnesses are expected to testify at the hearing, according to former prime minister’s team. The court is expected to announce a verdict at the end of a trial that has gone on for two years.
Days after her impeachment, Shinawatra saw her government overthrown by a military coup on May 22, 2014.
She has denied all the charges against her.
Thailand has been the scene of a political crisis since another military coup — in 2006 — that deposed Yingluck’s elder brother, Thaksin Shinawatra, a billionaire-turned-politician who clashed with the then-royalist establishment.