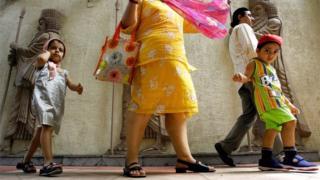 By Bhavya Dore Mumbai
A jubilant Katy Gandevia passed around a box of celebratory sweets she had received in her office at the Tata Institute of Social Sciences in Mumbai.

“That,” she said, gesturing towards the sweets, “was to celebrate the birth of the 102nd baby.”
The baby in question had been born under the Jiyo Parsi scheme, a federal government initiative launched in 2013 to stem the decline of the India’s Parsi population. Dr Gandevia is senior member of this initiative.
Every baby born is a moment for celebration in the dwindling community that traces its ancestry to Zoroastrian refugees who landed on the coast of the western Indian state of Gujarat around the 8th Century.
Fleeing Islamic persecution in Persia, the new arrivals integrated with the local populations, whilst maintaining their distinctive ethnic identity. As a highly-educated and prosperous community, their success and influence has been far in excess of their size. And that size is ever-shrinking.
With each census, the number of Parsis has dropped, even as India’s population of 1.3 billion people has grown.
The latest 2011 census put the number of Indian Parsis at 57,264, a fall from 1,14,000 in 1941, and extinction has increasingly become a reality.
Jiyo Parsi is an ambitious plan to halt that.
For its first phase – which will conclude in a few months – the scheme received 100 million rupees ($1.5m;£1.1m) to defray costs of fertility treatments for Parsi couples earning less than 2m rupees a year.
The campaign also sought to encourage Parsis to go forth and multiply through advertising, counselling and outreach efforts, .
That flipped the script on family planning, a key part of Indian government policy for decades.
When it was first announced in September 2013, the scheme quickly became both a headline and a punchline. It’s quirky outreach included ad campaigns that urged couples to “Be responsible, don’t use a condom tonight” and told young men to cut the umbilical chord and marry because, “isn’t it time you broke up with your mom?”
But even though some objected that the campaign reduced women to their uteruses, it appears to have made a dent.
“The scheme created an enthusiasm and a buzz,” Ms Gandevia told the BBC. “People were pessimistic but this has been a ray of hope.”
Most of the babies have been born in Mumbai, which has India’s largest concentration of Parsis. The number includes five pairs of twins and a roughly equal number of boys and girls.
One woman who declined to be identified claimed she had given up on having a child after repeated efforts which drained both her patience and money, but said that the financial assistance and counselling under the Jiyo scheme helped her conceive.
Another woman said: “At the age of 41 when most women start experiencing the symptoms of menopause, I am experiencing the symptoms of a long-awaited pregnancy. At the end of every tunnel there is light.”
Before she became a coordinator for the scheme, Ms Gandevia, a social scientist and Parsi herself, had studied this tightly-knit group for more than a decade.
She says the first cause for alarm was in 2001, when census figures showed a sharp drop.
“That was the time the bells should have started ringing. the writing was on the wall,” she said.
More than 30% of Parsis don’t marry, and an equal proportion are more than 60-years-old. The total fertility rate for Parsis- the number of children a woman has – has dropped to 0.8. The average for India is 2.3, and 2.1 is the figure at which a population remains steady.

Zoroastrianism
• Zoroastrianism is one of the world’s oldest monotheistic religions – Zoroastrians believe there is is one God called Ahura Mazda (Wise Lord)
• Founded by Zoroaster, also known as Zarathustra (pictured above), in Persia about 3,500 years ago
• Once one of the world’s most powerful religions, it is now one of the smallest
• Zoroastrians are roughly split into two groups, Iranians and Parsis – there are an estimated 110,000 Parsis around the globe and in 2006 the New York Times reported there were probably less than 190,000 Zoroastrians worldwide
• They worship in fire temples and believe fire represents God’s light or wisdom
A combination of factors has been responsible for this: marrying outside the community or not at all, divorce, couples having only one child and late marriages.
Furthermore, women who marry outside the community are not allowed to raise their children in the faith.
Hence, the two-pronged efforts of the team, which believes that talking to people, without lecturing them on reproducing, can be a powerful motivator.
“It is all because of the advocacy work that I decided to have a second child,” said a Mumbai-based woman who is in her first trimester. “In whatever way, it is my small contribution.”
The woman said she initially decided not to have another child to focus on her career.
“But maybe subconsciously I wanted another kid,” she said. “All of us are happy.”
Emphasising community pride and the joys of kinship has been another thrust area – a new advertising campaign launching later this month will focus on family.
Impressed by their efforts, even the Japanese government – a country where the population is rapidly aging and the fertility rate has fallen to 1.4 – has approached Parzor Foundation, an implementing partner, to decode the success of the campaign.
“When we started, we were going into unknown territory,” Shernaz Cama, the foundation’s director told the BBC. “This had never been attempted by an urban, educated community before. Now we are seeing interest from all over.”
Although the initial euphoria is palpable, it is too early to estimate any demographic impact it has had on the fertility rate.
“But 102 babies were born that would have otherwise not been there if Jiyo Parsi hadn’t provided support,” said Ms Gandevia. “That is a fact.” She added that the real effects would be visible a generation from now.
Still, there are currently more Parsis dying than are being born every year. In Mumbai, for instance, about 750 Parsis die annually, and 200 children are born, pointed out Jehangir Patel, the editor and publisher of Parsiana, a community-focussed publication in the city.
“Even five or 20 more births per year more won’t change the demographics,” he said. “It’s a good endeavour helping couples who might have otherwise not been able to have children but it won’t drastically change the picture.”
Bhavya Dore is a Mumbai-based journalist