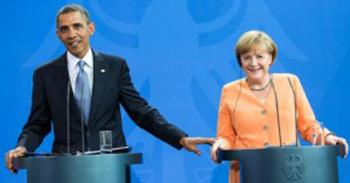 President Trump has defined the future as a battle between old-style nationalism and neoliberal globalism, a challenge that the West’s elites mock at their own peril, as ex-British diplomat Alastair Crooke describes.

Europe, the Guardian tells us, has its old “mojo” back. There is a new optimistic mood – “or even a triumphalist mood, in much of Europe.” German Chancellor Angela Merkel is praised for achieving a “nuanced” final statement at the recent G20 meeting, and for “standing up” to President Trump, on behalf of the “liberal international order.” Really? If this is the “mood,” so be it, but even the Guardian op-ed writer argues that the narrative that Europe somehow “is back” – having beaten back the “populist wave” – is flawed: “the spirit of cohesion is overstated.”

Actually, the Euro-élites must have had their attention fixed elsewhere. For the “Great Disrupter,” as David Stockman calls President Trump, threw a hefty stone into the liberal pond: It is fine to ignore it, but what is happening is that the old division between those inside the supposedly democratic, globalist “sphere,” and those of the delinquent “regimes” outside it – and lying beyond its civilized walls – is being, bit-by-bit, dissolved.

The “war” that used to be between one sphere and another is being overtaken by the insurgency within spheres. The bitterness and polarization so induced is having its effect: the “international liberal order” (as the Guardian terms it), may no longer work as the highly centralized, quasi- cohesive establishment that it has been for the last six decades. There is no more a “center”; no more a cohesive certainty; nor a common directionality, or purposiveness.

If Europe wants to present the G20 deliberation as the clever finessing of discordant views, that is understandable. But whereas Europe included in the declaration the commitment to “free” trade, U.S. negotiators parried this with a “right” – the right to protect against unfair trade practices, and to consider the imposition of tariffs, where appropriate (i.e. on steel products).

On climate change, the G19 stood by the Paris accord, but America, by contrast, retained its decision to withdraw from it. The consensus stood by carbon-reduction measures, but found this juxtaposed – uncomfortably – with an American call (rather), to use fossil fuels more cleanly. It was agreement, I would suggest, to disagree, rather than some Merkel-made synthesis.

But the biggest rock thrown by Trump in the G20 pond, passed almost unnoticed. But potentially, it can hurt the Europeans in the spot, just where it hurts most. And this did not even occur at Hamburg. It occurred on the way there.

Conservative commentator Pat Buchanan summarizes: “Calling the Polish people ‘the soul of Europe,’ [Trump] related how, in the Miracle of the Vistula in 1920, Poland, reborn after 12 decades of subjugation, drove back the invading Red Army of Leon Trotsky.

[Then Trump] described the gang rape of Poland by Nazis and Soviets after the Hitler-Stalin pact. He cited the Katyn Forest massacre of the Polish officer corps by Stalin, and the rising of the Polish people against their Nazi occupiers in 1944.

“When the Polish Pope, John Paul II, celebrated his first Mass in Victory Square in 1979, said Trump, ‘a million Polish men, women and children raised their voices in a single prayer … “We want God” …’

“What enabled the Poles to endure [all their tribulations] was an unshakable belief in and a willingness to fight for, who they were — a people of God and country, faith, families, and freedom — with the courage and will to preserve a nation built on the truths of their ancient tribe and Catholic traditions.

“ ‘The fundamental question of our time is whether the West has the will to survive. Do we have the confidence in our values to defend them at any cost? Do we have enough respect for our citizens to protect our borders? Do we have the desire and the courage to preserve our civilization in the face of those who would subvert and destroy it? [emphasis added].

“ ‘We can have the largest economies and the most lethal weapons anywhere on Earth, but if we do not have strong families and strong values, then we will be weak and we will not survive.”

Did the G20 élites miss the point? Trump is asking the Europeans whether “you [still] have the will, the steadfastness, the clear-sightedness and strength, by which ‘to take back’ your culture, your way-of-being, your values” – your nations? The message was, I believe, not directed so much at the Poles, but rather, at other Europeans. Trump implicitly targeted the part where it hurts Europe the most: the immigration issue, at diversity and politics, and at the fear of Europeans for their cultural submersion, under the wave of immigration. (The G20 offered no solutions to this crucial question).

Did Merkel — the media-designated new “Leader of the West” — impress with her “resolute” response to mobs rioting in Germany’s second city, Buchanan asks, rather pointedly? The scenes from Hamburg, perhaps, he implied, reinforced Trump’s point.

Many in Europe may be offended by Trump’s words, perceiving them to be wholly contrary to everything for which they stand. They too, may dislike Trump, viscerally. But these feelings should not blind them to the very key point that he – rightly or wrongly – is pressing: Is diversity and identity politics our strength (as we are told), or is the possession of some sort of historical and cultural (including a spiritual) legacy, something which binds us, and gives a people its inner strength?

It is, at the very least, a valid question. And, it is the sides which are taken on this issue, which represent the new fault line that is displacing the old “good guy” globalist, versus the delinquent, “bad guy,” non-global sphere. This new insurgency is in-house. And the “center” has gone — bifurcated possibly irreparably, into two.

And so, to Trump’s final symbolic “act of disruption”: the prolonged and warm encounter with President Putin. If not on exactly the same page as Trump, Russia nonetheless, has been pursuing a parallel path of political and cultural re-sovereigntization. The lengthy meeting with the Russian President disconcerted and outraged many (see here, for example). But the provoking of such an (over) reaction of outrage precisely would be viewed as its main merit by many Trump supporters, who value disruption of the old paradigm.

Trump was not as alone and as isolated as the mainstream media portrayed him: the élites may revile and deprecate his abdication of American global leadership, and for dangerously insisting that job losses resulting from unfair trade practices must be redressed, but there is, however, a constituency within Europe that is entirely in sympathy with his approach.

Trump’s questioning of the orthodoxy that the U.S. must retain hegemony over the global order, and his sense that the free trade system simply has lost America its manufacturing base, possesses a self-evident content for many ordinary Americans and Europeans. Trump says simply enough: “We (the U.S.), can no longer afford it. We are up to the ceiling, and out of the windows, piled high in debts, and we anyway get zilch in return from all these ingrates who shelter under our bankrupting global security umbrella. Let us not go on trying to impose this on others; we shall rebuild ourselves, and pursue our own, culturally distinct, American way-of-being – and let them pursue theirs’. It is simple; it is plain; it has appeal.

Whether one thinks Trump is right or wrong on these issues, is beside the point. The essential point is that the key components — the Poland speech, the G20 dissidence, and the warm Putin meeting — do form a concerted, strategic whole. Too, the atmospherics were better at the G20, than at the G7 meeting in Sicily in May – President Trump seemed actually to be enjoying himself in Hamburg at dinner, (and why not). But two summits into Trump’s Presidency, it is hard to escape two conclusions:

And secondly, the immediate relapse on the President’s return to Washington into the Donald Trump Jr. Russia “hysteria” over a “faux scandal” as an Op-Ed in the Washington Post describes it (whatever the whys and wherefores of the affair), reinforces the conclusion (as Mike Krieger notes) “that America may no longer work as the largely centralized, semi-cohesive unit it has been for our entire lives.” Maybe he puts it too mildly. To outsiders, Americans seem to be eating each other alive.

Turning and turning in the widening gyre

The falcon cannot hear the falconer;

Mere anarchy is loosed upon the world,

The blood-dimmed tide is loosed, and everywhere

The ceremony of innocence is drowned;

The best lack all conviction, while the worst

Are full of passionate intensity.