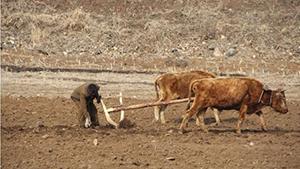 North Korea is facing severe food shortages after being hit by its worst drought since 2001, a report from the United Nations says.

Crop production in the country has been hampered by a prolonged dry period and food imports are now urgently required to fill the gap, the UN has warned.
The most vulnerable, such as children and the elderly, will be worst hit.
In the 1990s, hundreds of thousands of North Koreans are believed to have died during a widespread famine.
The latest drought is serious, the UN’s Food and Agriculture Organisation (FAO) said on Thursday, because bilateral food aid to the country has dramatically fallen in recent years.
This is due in part to sanctions implemented to punish North Korea over its weapons development programme. The UN’s World Food Program (WFP) has also seen a steep drop in contributions, the agency says.
What’s happening?
A persistent lack of rainfall in North Korea in recent months has decimated staple crops such as rice, maize, potatoes and soybean, which many of the country’s citizens depend on during the lean season that stretches from May to September.
In key crop-producing areas, rainfall from April to June 2017 was well below the long-term average. This severe dry spell disrupted the early stages of the agricultural process, according to experts from the FAO quoted in the report.
The harvesting of crops from the early season, including wheat, barley and potatoes, has also been affected, the FAO said.
The FAO estimates that the production of 2017 early season crops has plunged by over 30% from the previous year’s level of 450,000 tonnes to 310,000 tonnes.
Why is this drought so bad?
When the rain finally came in July, it was too late to boost crop production as the planting and growth period for food to be harvested in October and November had already passed.
This also means that any rainfall from now on will not make up for the dry weather of the last few months, a crucial period for the country’s agrarian economy.
The key regions affected include the major cereal-producing provinces of South and North Pyongan, South and North Hwanghae and Nampo City, which normally account for about two-thirds of overall cereal production, the FAO said.
With forecasts of a reduction in crops overall this year, the food security situation is expected to further deteriorate in the coming months and demand for imports is likely to increase.
What’s the possible effect?
Inefficient food production means that large parts of the North Korean population face malnutrition or death.
As key crop planting and production periods for 2017 elapse, the country requires food imports for at least the next three months to ensure that it has an adequate supply, the FAO said.
North Korea’s ability to stave off famine has also been hampered in recent years by flooding, which destroys crops, along with homes and villages.
The cumulative effects of flooding, combined with inefficient food production, have led to a stagnation in the country’s ability to deal with food shortages and malnutrition.
A series of regeneration projects are now needed, the FAO said, including upgrading the country’s irrigation systems to help reduce water losses and increase water availability.
Has this happened before?
North Korea suffered serious famine in the 1990s.
It began in 1996 and in 1998 the WFP mounted what it said was the biggest emergency operation in its history to help avert a further escalation of the crisis.
That year, the agency said it planned to provide aid to about a third of the population, or nearly seven-and-a-half million people.
Children between the ages of one and two who were surveyed at the time were described as acutely malnourished, with some families having to rely on leaves and twigs to stay alive.
In 2001, after North Korea suffered its worst winter in 50 years, the country faced a serious lack of corn and wheat.
In the period between 1996 and 2001, the WPP said it had supplied food to about eight million of the country’s citizens.
North Korea’s government controls one of the world’s most secretive societies which, until the food crisis emerged in the mid-1990s, resisted seeking help from international bodies.
Changes in North Korea’s economy over the past 20 years make a repeat of the disastrous famine of the 1990s much less likely.
Agriculture is still controlled by the state but reforms have been quietly introduced to allow farmers to keep more of their produce, leading to an increase in production.
Foreign access to the country, however, is still tightly controlled.