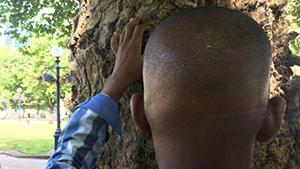 By Matthew Price Chief correspondent, BBC Radio 4 Today
This is the story of the man who migrated twice.