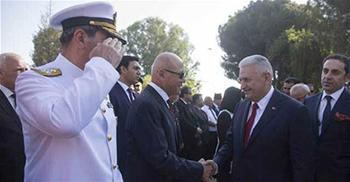 Turkey on July 20 accused Greek Cyprus of taking “dangerous” steps in its search for energy resources in the Mediterranean, two weeks after crunch talks aimed at reunifying the divided island collapsed, as reported by AFP.

Turkish Prime Minister Binali Yıldırım visited the northern Cyprus to mark the 43rd anniversary of Turkey’s intervention on the island.

July 20 is celebrated in the north as the anniversary of the “Cyprus Peace Operation.”

The talks had been given added focus by the growing importance of energy reserves in the eastern Mediterranean, in particular around the island.

Turkey argues that breakaway northern Cyprus has rights to any reserves discovered and is anxiously eyeing moves by the Greek Cypriot.

“Turkey believes the energy resources in the eastern Mediterranean are an opportunity but the one-sided steps taken by the Greek Cypriot side are untimely, dangerous and encouraging the lack of a solution,” Yıldırım said at a ceremony in Nicosia, quoted by state-run Anadolu Agency.

Turkish President Recep Tayyip Erdoğan has warned global companies to stay away from any energy deal with the Greek Cypriots or lose Ankara’s friendship.

In response to the gas exploration and drilling, Turkey has dispatched a frigate into international waters to the southwest of the island to monitor operations.

Armenian and Russian foreign ministers to meet in Moscow December 7