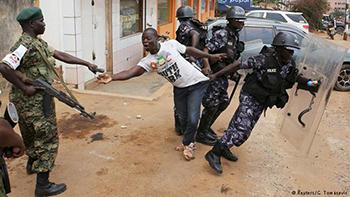 Police in Uganda have arrested at least 53 people including an opposition leader, for demonstrating against a plan to amend the constitution and scrap the presidential age limit.
Norbert Mao, leader of the Democratic Party, was arrested alongside his supporters as they protested against the planned constitutional amendment.

For days now, a clique of legislators from the ruling party, National Resistance Movement, (NRM), has been clandestinely agitating for the removal of the age limit which would give a leeway for the incumbent President Yoweri Museveni to run for another term in 2021.
According to the constitution, anyone above the age of 75 is not eligible to run for the presidency. This means that Museveni who is 73 years old and has been in power since 1986 will be 77 years at the next election, and , therefore not eligible to run again.
Daniel Ruhweza, a professor of constitutional law at Makerere University said that amending the constitution to remove the age limit will be catastrophic.
“The writers of the constitution had a reason why they discussed it before we even debate whether or not we should remove it,” he told DW. “I think it will be prudent for us to test whether the reasons for which they placed it in our constitution are justifiable reasons. Ours is a young democracy and indeed the debates around constitutionalism need a mature democracy.”
Livingston Sewanyana, Executive Director of the Foundation for Human Rights Initiative also told DW that, “for us it [age limit] is an important safeguard considering the fragility of the Ugandan state.”
However, President Yoweri Museveni has distanced himself from those agitating for constitutional amendments to lift the age limit as mere idlers.
“Part of the rumour is that there is a debate about age limit; what are you debating? Which proposal are you debating or talking about? Where is the proposal?” Museveni queried in a meeting with reporters.
However, opposition groups have described Museveni’s denial of the whole plan to remove age limits as a ploy to hoodwink Ugandans and push it through his cadres or members of parliament from his party.
Most recently, James Kakooza, a legislator from the ruling NRM party who is also renowned for having pushed for the removal of the presidential term limits in 2005, has embarked on another political maneuver to push for the removal of presidential age limit.
“I think there was a contradiction in the constitution. If somebody has the ability, then you cannot remove that democracy from the people,” Kakooza said.
Social media and youth against removal of age limit.
Social media has been awash with the debate on removing presidential age limit with some youth groups even organizing mock birthday parties for President Museveni. They have also coined a slogan that says, “Age limit is the Limit.” On several occasions they have clashed with police while rallying Ugandans on the streets of Kampala to join their campaign against lifting of the age limit.
Although the bill has not yet been tabled in parliament for debate, the speaker of the Ugandan parliament Rebecca Kadaga said that some legislators have been threatened not to amend the constitution.
“Members [parliamentarians] are being targeted, they are receiving threatening messages and I want to assure the country that I have not seen any bill. It is not here but there is anger everywhere,” she told parliament.
On the streets of Kampala, the idea of lifting the age limit is not so popular. Jacquelyn Kakunzi told DW that, “our democracy is not stable. In Uganda today where 75 percent of Ugandans are youth and below the age of 35 weare really creating a situation where the youth cannot be leaders.”
Opposition leaderKizza Besigye has also raised concerns and denounced the move to lift the age limit. Besigye who has lost to Museveni in the previous four elections has been calling for an uprising and reject the proposals. “The way forward, we recommend that all pro-democracy forces should focus on terminating control of power by the NRM junta,” Besigye said.