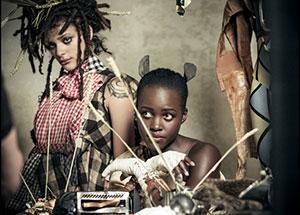 LONDON — On a muggy afternoon in May, in a heavily guarded studio hidden along a nondescript industrial North London back road, RuPaul, the actor, drag queen and TV personality, was holding court inside a padded box, wearing a resplendent scarlet red ball gown from which oversize playing cards tumbled from the voluminous skirt.