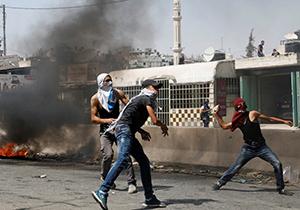 “Those who initiated the violence and killed three Palestinians were the Israeli police,” he said.

MK Ahmad Tibi, also from the Joint List party, said that the responsibility to the clashes to those who died is the government and its head, Prime Minister Benjamin Netanyahu.

“Netanyahu said that in Mecca there are metal detectors. But Mecca is not under occupation, al-Quds [Jerusalem] is,” he said.

“Our Jerusalem is Arabic, Islamic, Palestinian,” he added.

Haneen Zoabi, Jamal Zahalaka and Osama Saadi were among the attending MKs.

Protests were relatively limited around Jerusalem and the West Bank, after Israeli security forces spread out in large numbers in anticipation of widespread rioting.

Muslim leaders and Palestinian political factions had urged the faithful to gather for a “day of rage” on Friday against the new security policies, which they see as changing delicate agreements that have governed the holy site for decades.

Knesset Speaker Yuli Edelstein posted on Twitter two screenshots from videos of Arab MKs from Friday and wrote: “This is a shame! It is a shame that the precious time of our security forces is being wasted.”

Access to the shrine for Muslims was limited to men over 50 but open to women of all ages. Roadblocks were in place on approach roads to Jerusalem to stop buses carrying Muslims to the site.

At one location near the Old City, stone throwers did try to break through a police line, and police used stun grenades to drive them back.

Protests also broke out in the Gaza Strip.

According to the Israeli military, dozens of Palestians were burning tires and throwing rocks at troops along the border fence. The soldiers returned fire towards the instigators.

“Today we are acting to bring the Al-Aqsa Mosque and Jerusalem back into the embrace of the the Arab World,” Hamas leader Ismail Haniyeh said during his weekly sermon in Gaza. “We shall not enter the Temple Mount through metal detectors.”