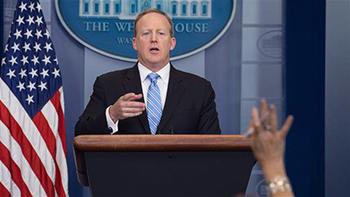 In a swift set of developments, former deputy Sarah Huckabee Sanders was announced as Spicer’s replacement.
And Scaramucci, a Wall Street financier, addressed reporters from the briefing podium in his new capacity as communications director.
Hinting at what may have driven the shakeup and describing his own challenge in taking the job, he lamented a “disconnect” between the way President Trump’s team and the media see the president.
“We’re going to work hard to close that spread,” he said.
Sanders also read a statement from the president on Spicer: “I am grateful for Sean’s work on behalf of my administration and the American people. I wish him continued success as he moves on to pursue new opportunities — just look at his great television ratings.”
Speculation about Spicer’s status with the White House has run rampant for months, but the appointment of Scaramucci was a deciding factor in his resignation.
Spicer told Fox News that when Trump made the decision to appoint Scaramucci, he felt it was appropriate for the president to have room to bring in his new team with a new slate — so he resigned.
Spicer tweeted Friday afternoon, “It’s been an honor & a privilege to serve @POTUS @realDonaldTrump & this amazing country. I will continue my service through August.”
Spicer originally was supposed to lead a newly restructured communications operation. Under that structure, the communications director would report to him — which may have caused a conflict with Scaramucci. And Spicer reportedly questioned the hiring.
His departure comes as Trump has shown growing frustration with the ongoing Russia meddling probe and the massive attention it receives in the media. Spicer has defended Trump throughout the controversy, but had taken on a lower-profile role in recent weeks.
Spicer’s daily briefings were a must-see event during the opening months of the Trump presidency. But Sanders has since taken the lead on many daily press briefings — which mostly are held off camera and no longer televised live.
Friday’s on-camera briefing with Sanders and Scaramucci was a departure from that.
While Spicer is close to White House chief of staff Reince Priebus, Priebus told The Associated Press that he supports Scaramucci “100 percent.”
“We go back a long, long way and are very good friends,” Priebus said of Scaramucci. “All good here.”
Spicer’s abrupt exit also came on a busy day for changes in Trump’s inner circle.
News broke overnight on the resignation of Mark Corallo, who had been the lead spokesman on behalf of Trump’s long-time personal attorney Marc Kasowitz and the legal team. Corallo, who was previously a spokesman for the Justice Department, reportedly objected to public criticisms of Special Counsel Robert Mueller. His resignation followed Trump telling The New York Times that he didn’t want Mueller investigating Trump family business ties outside the Russia scope.
Kasowitz, meanwhile, is stepping back to take a lower-profile role.
A source said Kasowitz will continue to give his input and guidance to the president, as well as all members of the outside counsel.
Scaramucci, who supported Trump during the general election, will now fill the White House role that has remained vacant since Mike Dubke’s resignation in May. His background is in the financial ranks of New York, having founded a global hedge fund. He later worked with Trump’s team during the campaign and transition and more recently was named senior vice president and chief strategy officer of the Export-Import Bank in June.
Spicer’s departure marks the end of a rocky tenure in which the president’s top spokesman at times struggled to keep pace with Trump’s sometimes-chaotic leadership style — and a swirl of controversies.
During the 2016 election cycle, Spicer was the chief strategist and communications director of the Republican National Committee. He later came to the White House along with Priebus, the former RNC chairman who is now Trump’s chief of staff.
Spicer hasn’t had the rosiest relationship with the media since joining the White House. He’s clashed with reporters over “fake news” and said repeatedly the president was fed up with news reports that were “patently false.”
In February, he came under fire for barring reporters from several media outlets from participating in a scheduled press briefing.
His prickly relationship with the press was widely mocked on “Saturday Night Live” with Melissa McCarthy playing Spicer.
Fox News’ John Roberts and The Associated Press contributed to this report.