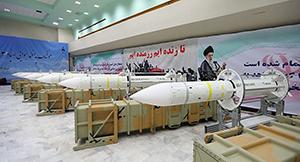 With Washington and Tehran increasingly at odds, Iran has announced the launch of a new missile production line.

The country’s new Sayyad 3 missile can fly as far as 120 kilometers and reach an altitude of 27 kilometers, the state-owned media company Press TV reported.
Iranian Defense Minister Brigadier General Hossein Dehqan participated in an inauguration ceremony of the launch of the Sayyad 3 production line on Saturday, only days after the US hit 18 individuals and entities it says support Iran’s ballistic missile program and procurement for Iran’s Revolutionary Guard Corps with new sanctions.
“The Sayyad 3 Missile has been designed based on the world’s latest technologies,” Dehqan said at the ceremony at Iran’s Khatam al-Anbiya Air Defense Base. It can “engage different types of threats, such as radar evasive fighter planes, unmanned aerial vehicles, cruise missiles, helicopters, as well as various types of modern aircraft of high maneuvering capabilities and speed… within the sphere of its operation.”
The new missile has been fitted with combined maneuvering capability, advanced surveillance technology, infrared capability and electronic warfare defenses, he said.
Dehghan also commented on the recent $110 billion weapons deal struck between the Trump administration and Saudi Arabia, which he said was intended to threaten Iran.
“We recently witnessed an immense purchase that some countries in the region paid as a ransom to America and they intend to bring weapons into the region, and this purchase was done with the goal of threatening Islamic Iran,” he said, Reuters reports.
The Trump administration has taken a hard line on Iran. US President Donald Trump campaigned on promises to tear up the historic Iran nuclear deal reached by his predecessor in 2015, but has so far honored the agreement while finding other ways to sanction and threaten the state.
The missile enters Iran’s arsenal as of Saturday, officials at the launch ceremony said.