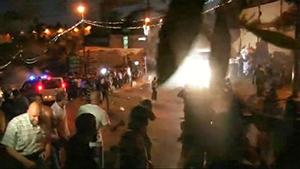 Ari Rabinovitch
JERUSALEM (Reuters) – Israel sent extra troops into the occupied West Bank on Saturday and its police broke up a crowd of stone-throwing Palestinians in Jerusalem as international concern mounted over the deadliest outbreak of violence between the two sides for years.

The Palestinian Health Ministry said one Palestinian was killed during a separate clash outside the city, taking the death toll from the past two days to seven. It did not provide details of how he died.

Three Israelis were stabbed to death on Friday while eating dinner in a West Bank settlement. Hours earlier, three Palestinians were killed in violence prompted by Israel’s installation of metal detectors at entry points to the Noble Sanctuary-Temple Mount compound in Jerusalem’s walled Old City.

Russia, the United States, the European Union and the United Nations – the so-called Quartet of Middle East peace mediators – said in a joint statement they were “deeply concerned by the escalating tensions and violent clashes taking place in and around the Old City of Jerusalem”, and called for restraint on all sides.

Diplomats said the U.N. Security Council would meet to discuss the situation on Monday. Sweden, Egypt and France requested the meeting to “urgently discuss how calls for de-escalation in Jerusalem can be supported”, Sweden’s Security Council coordinator, Carl Skau, posted on Twitter.