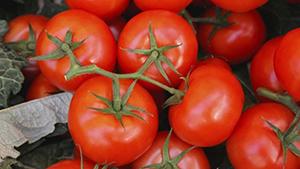 There’s new research on the health benefits of everyone’s favorite nightshade just in time for tomato season. Whether you grow your own or pick them up from your local grocery store or farmer’s market, from May until about August or October (depending on your area’s growing season), you can expect super-fresh local tomatoes that are packed with flavor.

And if you need an extra incentive to enjoy them by the cartload while they’re in season, a study published by Scientific Reports in July of 2017 shows that tomatoes may protect us from the most common skin cancers, keratinocyte carcinomas.

THE RISK OF HAIR EXTENSIONS

These skin cancers are the most common form of cancer in the US and include basal cell carcinomas and squamous cell carcinomas, also sometimes referred to as non-melanoma skin cancers. These cancers are closely linked to cumulative sun exposure. Using a broad spectrum sunblock that protects against both UVA and UVB rays reduces your risk of keratinocyte carcinomas, but since the U.S. Surgeon General’s Call to Action to prevent skin cancer in 2014, researchers have looking more closely at other ways to reduce risk.

This latest study is big news, but it’s not too surprising since studies have shown for years that tomato paste can protect against short-term damage from the sun. One study showed that volunteers who ate tomato paste daily for 12 weeks saw a whopping 33 percent increase in sun protection. (As a bonus, they also found that the study participants had increased levels of procollagen, which is the precursor of collagen, the protein responsible for keeping skin smooth and supple.)

THE RISKS OF HAIR EXTENSIONS

The chemical behind the magic of tomatoes is called lycopene, and it’s a carotenoid found in all tomato products but especially concentrated in cooked tomatoes. One of the primary purposes of carotenoids in plant biology is to protect them from the sun, and it seems that we can cash in on that protective effect when we eat plants that contain high levels of carotenoids such as lycopene. However, because supplementing with lycopene is less effective than eating tomato products, researchers suspect that other phytochemicals in tomatoes may play yet-to-be-identified roles in protecting us from the sun.The catch with the new study showing a link between tomatoes and cancer risk is that it wasn’t a human study. It was found that mice who were given tomato in powdered form developed fewer carcinomas than those who weren’t given tomato products.

A long-term human study would need to be conducted before anyone could say definitively that tomatoes can help prevent carcinomas in humans, but given tomatoes’ proven power to protect us from the sun damage that contributes to carcinomas, it’s a pretty good bet that studies will show at least some protective effect. (And we may not see a human study for quite some time. It would be complicated and expensive—participants would have to be followed over the course of many years, and study authors would have to factor variables like participants’ genetic predisposition to skin cancers, differing levels of sun exposure, and sunblock use into their study results.)

THE WEEK IN PICTURES

The results look promising, but don’t trade in your bottle of sunblock for a can of tomato paste just yet. You have to consume a pretty significant amount of lycopene to see protective effects, and it doesn’t compare to a heavy-duty sunblock for high-exposure days. But if you’re looking for a little extra daily protection (or an excuse to eat as many tomatoes as you want), tomatoes may help protect you from mild sun damage and possibly carcinomas. Cooked tomatoes have more lycopene than raw tomatoes, and tangerine varieties seem to have lycopene that’s more bioavailable than other varieties. Tomato paste, the most concentrated tomato product, is great on homemade pizza and in simple-to-make tomato sauces.

Studies have also shown that the lycopene in tomatoes may help lower the risk of prostate, lung, and stomach cancers. So don’t forget to enjoy tomatoes while they’re available locally this summer, and remember that the healthy goodness of tomatoes is just a can opener away year-round.

This article first appeared on AskDrManny.com.