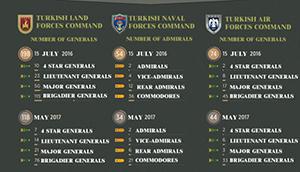 ByTM
130 generals and admirals in Turkish military were either dismissed or suspended as part of a widespread purge following a failed coup attempt in July last year.

According to a story in state-run Anadolu news agency on Sunday, NATO’s second largest standing military force has now 196 generals and admirals which had 326 in July 2016.
The Turkish Land Forces had 10 four star generals, 23 lieutenant generals, 50 major generals, 115 brigadier generals in July 2016 whereas their number decreased to 7, 14, 21 and 76 respectively in May 2017.
While the number of top soldiers in The Turkish Navy was 2 admirals, 4 vice-admirals, 12 rear admirals and 66 commodores in July 2016. However, their numbers are now 2, 5, 6 and 21 respectively as of May 2016.
Finally, there were two 4-star generals, eight lieutenant generals, 17 major generals and 45 brigadier generals in the Turkish Air Forces. Now, their numbers are two, six, three and 33 as of May 2017.
According to Anadolu, The number of commissioned officers came down from 32,189 in 2016 to 24,705 in 2017 while the number of non-commissioned officers came down from 66,978 to 62,781 in the same period.
Turkey survived a military coup attempt last July in which 249 people died.
Turkish government accuses faith-based Gülen movement of being behind the failed coup.
Despite Turkish Islamic scholar Fethullah Gülen, whose views inspired the Gülen movement, and the movement having denied the accusations, Turkey’s ruling Justice and Development Party (AKP) government and President Recep Tayyip Erdoğan launched a widespread purge aimed at cleansing sympathizers of the movement from within state institutions, dehumanizing its popular figures and putting them in custody.
According to a tally by TurkeyPurge.com, 138,148 people, including some 10,000 soldiers, had been dismissed from their jobs, 115,827 were detained and 55,425 jailed over alleged links to the movement as of July 10.