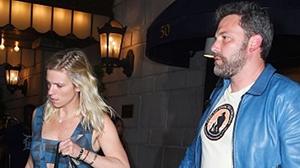 Natalie Reilly
Ben Affleck’s girlfriend, Saturday Night Live producer, Lindsay Shookus, is experiencing the hot glare of the media spotlight, with photos of herself with her new celebrity boyfriend turning into an almost daily occurrence.

Shookus, 37, who has the sort of name you’d expect to find in a frothy novel about Alpha females and adultery, is reportedly “comfortable with the attention” – at least according to an article on gossip site Page Six, which also reports that Affleck enjoys that Shookus is a non-celebrity, as “he’s never really dated a regular girl before”.

It’s true that with exes including Gwyneth Paltrow, Jennifer Lopez and his former wife, Jennifer Garner, Affleck’s choice of Shookus does make her look like a “hardworking normal girl” in comparison. It’s also true that apart from the persistent rumour that the Affleck-Shookus relationship began in 2013, while they were both married, we, the media, need a deeper hook on which to hang our narratives, and if “normal girl” fits, then so be it.

However, the idea of a wealthy producer of a celebrity-infested TV show (with a job so high-profile, an episode of Sex and the City was devoted to it), being referred to as “normal” is worth unpacking for a minute, especially when we consider the line that followed that quote.

“[Affleck’s] always gone for high-profile women. He wants to date people that know and understand his life.”

The subtext, then, is that Affleck, actor, director, Oscar-winner, failed Batman, poster-boy for celebrity f—ups, doesn’t have room right now for a high maintenance lady. He needs someone regular, hard-working, someone low-maintenance, someone who will, if he so desires, fall back and let Affleck be Affleck.

If Ben has to go off to direct a film for four months, (as he did with Argo) he doesn’t need some prissy woman nagging him about Hollywood fluff like … going on coffee runs or hanging out with the kids. (Because it’s not like Garner threw herself onto the red carpet while dripping in diamonds; indeed, she chose not to work while Affleck did.)

If this trope seems familiar, it’s because it is. It’s a meta echo, a real-life replication of the archetype of the Cool Girl, the mythological perfect girlfriend Gillian Flynn wrote about in her novel, Gone Girl, the movie of which Affleck starred in. The Cool Girl doesn’t complain when her guy has other interests that trump her needs. The Cool Girl has her own life, so she doesn’t care if her boyfriend is late or doesn’t show – she’s not about to nag him. She never pressures him to do needy stuff like meet her friends or family, she understands he already has enough pressure; because he has a lot on, right now, OK? So, she just goes with the flow. When he says jump, she says “Baby, I’m already jumping in a g-string, while eating a hot dog!”

The problem is, this Cool Girl with zero needs – just wholesale obedience to hyper-masculine, retro ideals of femininity – can not be maintained. It’s the relationship equivalent of the guy who hates his woman wearing too much make-up, but doesn’t realise his lady is just really good at applying waterproof mascara, highlights and concealer. And then one fine morning, when she’s feeling a little too comfortable in the relationship …

Basic emotional requirements, like intimacy, will always pop up. It’s here that the honeymoon phase might end. And if you’re a serial cheater, who has weathered allegations from your own ex-wife that you shtupped the nanny, you might find yourself looking around.

Because the irony in all of this Cool Girl shtick, is that Ben Affleck, who is charming and hilarious and by all accounts, intelligent; but who is also a divorcee; a single father of three kids and a recovering alcoholic with an alleged gambling problem and a myriad of failed movies under his widening belt, is high maintenance. Only, nobody ever uses that term, instead he’s a bad boy or he’s “troubled”.