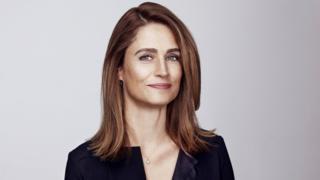 By Jessica Murphy- BBC News, Toronto
When Susanne Langmuir faces a big problem at Bite Beauty she asks herself: “What would Louis do”?

Louis is Louis Vuitton, the French designer who in the late nineteenth century turned a small box-making shop into a global luxury brand.
For Ms Langmuir, 48, “what would Louis do?” means: what’s the correct course of action that won’t compromise Bite’s original values?
The Bite founder says: “Not compromising for me is about knowing what the pure idea is, and finding a way to get rid of obstacles that would interfere with that.”
Her “pure idea” was to create line of lip products made solely from all-natural, food-grade ingredients. “You are what you eat. What you put on your lips, you eat,” she says.
Bite Beauty was launched in 2012 in partnership with Sephora, the France-based chain of global cosmetics stores which began selling the products in its outlets. The firm also has “lip labs”, where people custom-make their own lipstick.
Karen Grant, a beauty industry analyst at market research firm The NPD Group, says Sephora is a “great incubator” for small businesses. Bite’s launch was master class in getting it right, she says, praising the sleek and edgy product design.
Bite’s success did not come without hurdles, however, says Ms Langmuir. The Canadian beauty entrepreneur, born and raised near Toronto, hit two early roadblocks.
Major cosmetics production facilities said they could not produce formulas without at least some synthetic ingredients – a deal breaker for Ms Langmuir. So she built a lipstick factory in Toronto, where the products are still handmade.
The first chemist that Ms Langmuir hired almost torpedoed the project by quitting without notice shortly before the company had to show early formulas to Sephora.
Ms Langmuir, who sold Avon as a teenager and later worked as a cosmetics consultant for several companies, including Anthropologie and Urban Outfitters, had some experience creating formulas.
So she “made a bunch of things in the lab” and headed off to the Sephora meeting, telling them: “You don’t want to get too attached to the formula, but this is where we are heading.” She eventually recruited a former Estee Lauder chemist.
Ms Langmuir says she and her 140 Bite staff are used to handling challenges. “We find humour in them, we find a way to figure them out. We’ve got good perspective on what we do next,” she says. “It’s a good sign when there are significant challenges.”
Bite was not her first entrepreneurial challenge. Almost 20 years ago, she developed an organic face oil, but it never caught on with consumers. She also launched a perfume shop that was flooded with sewage water on its first day.
She describes herself as “a weeble-wobble” toy that bounces back after being knocked down. “There’s always another way,” she says.
The idea for Bite came from a gut feeling that there was an underserved market for all-natural cosmetics with an edgy, contemporary style.
In the spring of 2013, Bite held a promotional pop up shop in a Toronto Sephora store. She was given a window space to set up lab equipment and showcase how Bite’s small batches of handmade lipsticks were made.
People were captivated. Three weeks later she leased a shop in the SoHo district of Manhattan to set up the inaugural Bite Lip Lab, where people could create shades on the spot, and select the finish and scent within half an hour.
There are now four Lip Labs in the US and Canada, and plans to open more in Los Angeles and other cities.
The Lip Labs have placed Bite at the forefront of what the industry considers a growing trend – bespoke beauty – and will be “a crucial, fundamental part of our growth,” Ms Langmuir says.
Having clients who like to personalise products means Ms Langmuir can tap into the latest trends in the fast-moving cosmetics marketplace.
“For us, we learn about our clients, we learn about trends, we have lots of ‘aha moments’ where things that are not even on my radar (come up),” she says.
A year after launching the SoHo Lip Lab, Bite was bought by Kendo, which, like Sephora, is part of the French multinational luxury goods conglomerate Louis Vuitton Moet Hennessy. The sale price has not been disclosed.
However, Ms Langmuir remains in day-to-day control as chief creative officer, and the products are still handmade in Toronto, in the community where her kids go to school.
The purchase gave Bite the resources to scale-up the business, and Ms Langmuir has no regrets about selling. It will enable the company to “grow ten times as big”, she says. “I get to focus on the creative stuff, and that’s the icing.”
The challenge is to stay relevant in a industry where trends never stop changing – sometimes very quickly.
She grabs a sample lipstick from her desk and swipes a bright white pearlescent colour on her hand. “This is like, whoo! I toned that one down because it was a little too crazy. It’s finding that balance,” she says.
NPD Group’s Karen Grant says Bite must avoid just churning out more products to make scale. “A brand can’t get too detached or too comfortable,” she says.
Ms Langmuir knows that walking this tightrope will determine how relevant the company will be in 10 or 20 years. “It’s finding the balance between core and things that are new and exciting,” she says.