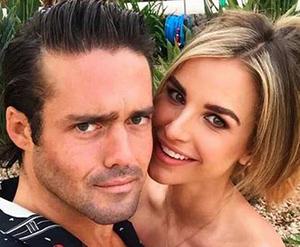 Aoife Kelly
Vogue Williams has revealed she is considering freezing her eggs.

The model and TV presenter is waiting on the results of a fertility test which was carried out this week at SIMS Fertility Clinic in Clonskeagh, Dublin.
“I have been hearing the tick-tock of my biological clock and I decided it was time to do something about it,” she writes in her Sunday World column.
The 31-year-old star, who is currently dating British reality TV star Spencer Matthews, admits she is “nervous” about the results.
“Recently I have heard so many stories from couples unable to conceive, friends not being able to have children at all and other people turning to IVF for help.
“These are all people of my generation and fertility is a huge issue for so many of them.”
While Vogue says that while having children is something she wants “more than anything in the world” she admits he wants a career too and that has been her “priority” thus far.
“Having children won’t be something I will miss out on. It’s too important to me,” she says, adding, “It’s just that I don’t feel I’m ready yet. I feel like I have so much more to achieve professionally, but when will it be too late?”
She is currently filming another round of programmes for RTE including a show in which they talk to women who decide to have children alone.
Vogue split from her husband Brian McFadden in July 2015 after three years of marriage, and she reveals she considered she may have to go it alone with regards to having children.
“When I found myself single after two long-term relationships, it did cross my mind that I might have to go it alone if it was something I wanted,” she writes.
“If children are what I really want for the future, the first step for me was to see how fertile I was.
“I may never need them, but I don’t plan on having children for a few years and after that time my eggs won’t be as good as they could potentially be now.”
Vogue urges other young women to have their fertility tested as her doctor revealed that some women face fertility issues in their 20s.
Online Editors