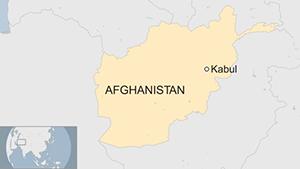 A car bomb has exploded in the Afghan capital, Kabul, killing at least 12 people, say officials.

Several people were also injured in the blast and the number of casualties is expected to rise.
An Afghan government spokesman said a suicide attacker detonated a bomb in his car in a mainly Shia neighbourhood in the west of the city.
The target of the attack was not immediately clear, and there has been no claim of responsibility.
But it occurred near the house of deputy government Chief Executive Mohammad Mohaqiq.
A spokesman for the politician told news agency AFP that “we assume the car wanted to target Mr Mohaqeq’s house but was stopped by guards”.
No militant group immediately claimed responsibility for the blast.
Past attacks have been attributed to either the Taliban or to so-called Islamic State.
The Afghan capital has seen a string of recent attacks including at least 90 casualties when a truck bomb exploded in May.