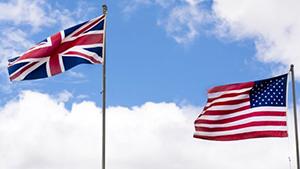 The UK is to hold its first talks with the US to try to sketch out the details of a potential post-Brexit trade deal.

International Trade Secretary Liam Fox will spend two days in Washington with US counterpart Robert Lighthizer.
EU rules mean the UK cannot sign a trade deal until it has left the bloc.
Mr Fox said it was too early to say exactly what would be covered in a potential deal. Firms and trade unions have both warned of the risks of trying to secure an agreement too quickly.
The Department for International Trade said discussions were expected to focus on “providing certainty, continuity and increasing confidence for UK and US businesses as the UK leaves the EU”.
Mr Fox added: “The [UK-US trade and investment] working group is the means to ensure we get to know each other’s issues and identify areas where we can work together to strengthen trade and investment ties.”
The British Chambers of Commerce (BCC) director general Adam Marshall said the US’s experience at such negotiations would make it difficult for the UK to secure a good deal.
“We’re just getting back into the game of doing this sort of thing after 40 years of doing it via the EU,” he told the BBC’s Today programme.
“So I think early on in the process, it would be concerning if the UK were to go up against the US on a complex and difficult negotiation.”
Mr Marshall said while the BCC’s business group’s members would welcome the US and the UK talking about how to increase trade between them, the focus should be on improving “small practical things” such as custom procedures rather than a comprehensive trade deal.
Trade unions the TUC and Unite have also expressed disquiet over a rushed US trade deal.
“Ministers should be focused on getting the best possible deal with the EU, rather than leaping into bed with Donald Trump,” TUC boss Frances O’Grady told the Guardian.
But independent economist Michael Hughes told the BBC’s World Business Report that talking to the US at this stage was important.
“To have some preliminary ides and get some basic principles out is a sensible thing to do,” he said.
He said currently talks were expected to focus on financial services and farming.
“In both cases it is likely that the UK would have to water down some of the standards it currently has, either in terms of genetically modified food or in terms of regulation of financial services firms operating in the UK, in order to get a deal, so it’s a delicate one,” he added.
Earlier this month, US President Donald Trump said he expected a “powerful” trade deal with the UK to be completed “very quickly”.
At the time, a UK government official said Mr Trump and UK Prime Minister Theresa May had agreed to prioritise work on a post-Brexit trade deal.

US-UK trade facts
• Trade between the two countries is already worth over $200bn (£150bn) a year
• In 2015, US exports of goods and services to the UK were $123.5bn, up by 4% from 2014, according to the Bureau of Economic Analysis
• The US is the single biggest source of inward investment into the UK
• Together the UK and US have around $1 trillion invested in each other’s economies
• The trading relationship between the UK and the US supports over a millions jobs in both countries