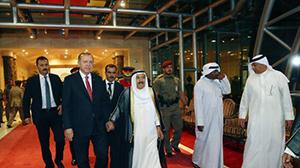 London: Britain has joined the US and France in calling for an end to the boycott of Qatar after the country pledged to fight terrorism.

“I welcome the Emir of Qatar’s commitment to combat terrorism in all its manifestations, including terrorist financing,” UK Foreign Secretary Boris Johnson said in a statement on Sunday. “We hope in turn Saudi Arabia, UAE, Egypt and Bahrain respond by taking steps toward lifting the embargo. This will allow substantive discussions on remaining differences to begin.”

The four nations cut off diplomatic relations with Qatar in June, accusing its government of funding terrorism. Qatari ruler Sheikh Tamim bin Hamad al-Thani has condemned their campaign to isolate his nation, saying it violates international law. He says his country is open to dialogue, if sovereignty is respected, to resolve the dispute.

US Secretary of State Rex Tillerson said last week that the US was “satisfied with the effort” Qatar is making to counter terrorism and urged its neighbors “to consider, as a sign of good faith, lifting this land blockad”.

But UAE Minister of State for Foreign Affairs Anwar Gargash said Qatari officials must revise their policies before discussions could begin, making the possibility of imminent talks more remote.

Maintaining the embargo may be harder than the Saudi-led bloc thought. The UAE.’s two government-controlled telecom providers, Etisalat and Du, said they will restore Qatar’s beIN Sports channels with “immediate effect”, according to local media.

BeIN is a subsidiary of Qatar’s Al Jazeera Media Network, which the boycotting nations want closed as one of their conditions to resolve the feud. More than a month of suspension had deprived soccer fans of access to premier sports competitions.

As the UK and US urged an end to the spat, Turkey’s President Recep Tayyip Erdogan – an important ally of Qatar – arrived in Saudi Arabia to leave his imprint on mediation efforts. After meeting the Saudi monarch and crown prince in Jeddah, Erdogan was set to fly to Kuwait, which has been the lead mediator. On Monday, Erdogan was due to travel to Qatar to meet its emir.

Turkey moved to support Qatar at the onset of the crisis, shoring up its food imports and expediting plans to send troops to the new Turkish base in the emirate. The military cooperation was denounced by the boycotting nations, which have demanded it end.

British politicians are also debating whether the Saudis themselves may deserve more of the blame.

The government of Prime Minister Theresa May is withholding a study on the Saudi role in fostering extremism in Britain, and opponents have accused her of pandering to the Saudi royals to protect British trade deals.