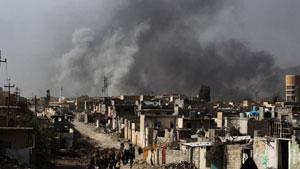 The devastation in Mosul and Aleppo are comparable, Professor Seyed Mohammad Marandi told RT, and yet the Western media only choose to highlight the suffering in the Syrian province and downplays the plight of those in the Iraqi city.

Marandi, a professor at the University of Tehran, visited Mosul with his colleagues after receiving an invitation from his Iraqi counterparts.
“The city is almost empty. People’s lives have been completely destroyed,” Marandi said. “The devastation across the city, and it’s the second-most important city in Iraq, is extraordinary.”
“Those we spoke to were all seemed very pleased for the city to have been retaken, but they all said the American airstrikes were very devastating and very hurtful to ordinary people, and many civilians were killed,” according to Marandi.
From October 2016 to July this year, Iraqi forces backed by US airstrikes as well as Shiite and Kurdish militia, had been fighting to wrest control of the city from Islamic State (IS, formerly ISIS/ISIL).
But what struck Marandi was the sharp contrast in the coverage of the tragedies of Mosul and Aleppo in the Western media.
“We also visited Aleppo after the liberation as well, and what was very interesting, or very unfortunate, was the devastation of East Aleppo which was occupied by al-Qaeda in Syria, was very similar to the devastation we saw in West Mosul,” he said.
“The bombing by the Americans destroyed so much of the west side of the city, yet the Western media said almost nothing about it.”
However, according to Marandi, as “the Russians, Syrians, Iranians were trying to liberate the city from al-Qaeda forces,” the Western media quickly tried to pin the blame for the civilian suffering on Damascus and its allies.
“But what we saw in Mosul was the same amount of devastation and we hear nothing from the Western media.”
During its air campaign to back Syrian forces liberating eastern Aleppo, Russia had been accused of being responsible for civilian casualties there. Moscow insisted that it bombed only terrorist targets and that various militant factions on the ground used civilians as human shields. Russia also insisted that militants prevented residents from leaving the embattled part of the city through special Russia brokered humanitarian corridors.
Many of the people Marandi spoke to also laid the blame for the troubles, at least partly, at the door of the Americans, which they hold responsible for the rise of both Islamic State and Saddam Hussein.
“Iraqis have been saying all this devastation since Saddam Hussein and up to now, the United States is to blame more than anyone else because they supported Saddam Hussein,” who was, according to the people, responsible for much of the destruction of the country.
“And then they [US] also helped create ISIS, alongside the Saudis and unfortunately the Turkish government and the Qataris. They funded the extremist groups as we know from the defense agency documents of 2012, and also the WikiLeaks documents which show that Hillary Clinton knew that in 2014, the Saudis and the Qataris were helping ISIS. So the Iraqi people are very much aware of what’s going on, and they believe for over forty years of devastation, the United States more than anyone is to blame, alongside its regional allies.”
The United States initially supported Saddam Hussein, giving him aid and equipment worth billions of dollars to fight the bloody war against Iran in the 1980s.
In 2003, the Washington-led invasion toppled Hussein’s government claiming he possessed weapons of mass destruction, something which later turned out to false. The operation and the removal of Hussein led to a power vacuum and a sectarian power struggle which is believed to have contributed to the rise of IS.