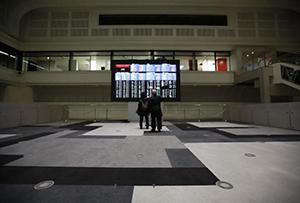 Nichola Saminather
SINGAPORE (Reuters) – The dollar held above a 13-month low on Tuesday after readings on U.S. factory and services activity beat expectations ahead of the start of a Federal Reserve meeting later in the day, but Asian stocks were subdued with few catalysts to drive them.

The dollar and U.S. Treasury yields rose on expectations the Fed will signal its readiness to begin reducing its bond portfolio at its September meeting.
The dollar index .DXY, which tracks the greenback against a basket of six major peers, was steady at 93.951 on Tuesday, up from Monday’s low of 93.823, its lowest level since June 2016.
The dollar was little changed at 111.065 yen JPY=D4 on Tuesday, after touching a six-week low on Monday.
The 10-year U.S. Treasury yield US10YT=RR was at 2.2499 percent on Tuesday, not far from Monday’s close of 2.253 percent and above Friday’s three-week low of 2.225 percent.
On Monday, Markit’s U.S. manufacturing and services flash surveys both beat expectations, while euro zone business growth at the start of the second half of the year slowed.
The euro EUR=EBS, which posted losses on Monday after earlier hitting a near two-year high, inched up 0.1 percent to$1.1653.
“As Europe’s business surveys continue to outperform those of the U.S., last night was a minor victory at best for the greenback,” said Matt Simpson, senior market analyst at ThinkMarkets in Melbourne. “The expectation of a slightly dovish Fed and a White House seemingly in turmoil is likely to weigh further on the greenback for the foreseeable future.”
Jared Kushner, President Donald Trump’s son-in-law and senior advisor, told Senate investigators on Monday he had met with Russian officials four times last year but said he did not collude with Moscow to influence the 2016 U.S. election.
The ongoing probes into Russia’s meddling in the election by congressional panels and a Justice Department special counsel, as well as weak U.S. economic data and reduced inflation expectations, have weighed on the dollar for much of the month.
In stocks, MSCI’s broadest index of Asia-Pacific shares outside Japan .MIAPJ0000PUS edged up less than 0.1 percent, with some markets looking for fresh impetus after hitting multi-year highs in recent weeks and few drivers in the region to guide them.
“Limited moves within global markets may leave Asian markets to chart their own course in the day,” said Jingyi Pan, market strategist at IG in Singapore. “It would be no surprise to see markets holding once again for key items into the latter half of the week.”
Australian stocks jumped 0.8 percent, clawing back all of Monday’s 0.6 percent loss. But Japan’s Nikkei .N225 slipped 0.1 percent, and South Korea’s KOSPI .KS11 retreated 0.2 percent.
Chinese shares also fell, with the bluechip CSI 300 index .CSI300 down 0.3 percent and the Shanghai Composite .SSEC dropping 0.1 percent. Hong Kong’s Hang Seng slightly advanced.
Overnight on Wall Street, the Nasdaq .IXIC set a record high as investors bet on solid earnings from technology companies. But the S&P 500 .SPX and the Dow .DJI closed in negative territory, following European stocks , which lost 0.2 percent.
In commodities, oil prices extended their recovery on a pledge by leading OPEC producer Saudi Arabia to cut exports in August to help reduce the global crude glut. Haliburton Co’s (HAL.N) executive chairman also said the U.S. shale drilling boom would probably ease next year.
U.S. crude CLc1 jumped 0.6 percent to $46.63 a barrel, after closing up 1.25 percent on Monday.
Global benchmark Brent LCOc1 added 0.6 percent to $48.90, extending Monday’s 1.1 percent rise.
The marginally stronger dollar kept gold’s gains in check XAU=, with the precious metal pulling back slightly to $1,254.96 an ounce.
Reporting by Nichola Saminather; Editing by Kim Coghill and Lisa Twaronite