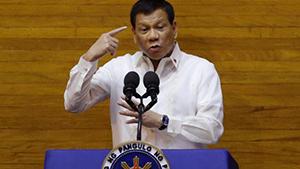 Lindsay Murdoch
Bangkok: Philippine President Rodrigo Duterte has ordered his country’s military to buy drones and planes and recruit between 35,000 and 40,000 new recruits over the next two years to fight Islamist and Maoist insurgents.

The order came as the military’s top brass admitted they had underestimated the capabilities of militants affiliated with Islamic State, as fighting drags on more than nine weeks after the militants seized the southern Philippine city of Marawi.

In his second state of the nation address, Mr Duterte told MPs security threats had increased in the Philippines and the military needed more troops and modern equipment.

“I will build an armed forces that can fight [on] all fronts everywhere,” he said.

The Armed Forces of the Philippines (AFP) currently has more than 90,000 personnel, 30,000 of them in the army and the rest in the navy, marines and air force.

Military analysts say the nation’s military has needed a strategic overhaul and increased funding to modernise for years.

When Mr Duterte took power in June last year, he channelled security resources into a bloody war on drugs that has left thousands of mostly poor Filipinos dead.

But the intensity of the battle after an estimated 600 extremists swept through Marawi, a city of 300,000, on May 22 took the military by surprise and raised concerns that the southern Philippines may become a hub for IS as it loses ground in Iraq and Syria.

About 70 militants armed with sophisticated weapons remain holed up in the centre of the now mostly destroyed city, inflicting heavy casualties on Philippine troops, who have the backing of US special forces using drones and spy planes.

“It is disheartening. I thought the casualties will be minimised because we’re nearing the end of the crisis. But the clashes are getting fiercer … this could take a while,” said Defence Secretary Delfin Lorenzana.

Almost 600 people have been killed so far, including at least 114 soldiers.

Mr Duterte, who donned military fatigues and visited the troops in Marawi last week, said he told them “do not attack” to protect about 300 hostages, including a Catholic priest, but added the counter-offensive would not stop “until the last terrorist is taken out”.

He has extended martial law across the southern region, where about five million Muslims live, until the end of the year.

“What’s important is we do not want to kill people. If we have to wait there for a year, let’s wait for a year,” he said. “I don’t want these innocent people to be slaughtered.”

Snipers on rooftops pick off soldiers out on the streets and when the militants move from one building to another, they leave behind booby traps.

Analysts worry that the ability of the militants, who include foreign fighters, to hold out could attract more extremists to the region.

“It has inspired young extremists from around the region to want to join,” the Institute for Policy Analysis and Study said in a report.

The Marawi siege has prompted talks among regional and neighbouring countries, including Australia, on joint responses to the threat from jihadists.

Australia has sent two P-3 Orion surveillance aircraft to conduct missions over Marawi and offered more assistance to the Philippine military if required.

Meanwhile, Mr Duterte has called off talks between his government and representatives of Maoist rebels in the New People’s Army, which has waged an insurgency in the southern Philippines for decades, following recent attacks.

He said he would offer houses and money to rebels who surrender but vowed the government was ready to fight those who do not “for another 50 years”.