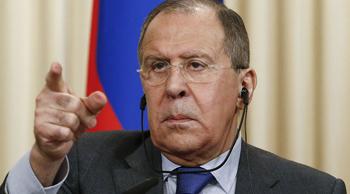 MOSCOW,. /TASS/. Final details of the southern de-escalation zone in Syria are being agreed, Russian Foreign Minister Sergey Lavrov said in an interview with the Kurdish television channel Rudaw on Monday.

“On July 7, Russia, the United States and the Jordanian side agreed on the establishment of the first such [de-escalation] zone in southwest of Syria,” he said. “Final details of how the functioning of this zone will be organized from the point of view of monitoring the ceasefire and from the point of view of ensuring unimpeded access for humanitarian cargoes and crossing the zone’s borders by civilians this or that way are now being agreed.”
“So, the approach that was committed to paper in Astana and is now being implemented in practice [along with the southern zones, three more such zones are to be established – TASS] encompasses the task of pacifying the situation via cessation of hostilities and concurrently via promoting solution of humanitarian problems,” Lavrov noted. “As is generally recognized, the active and rather resultative Astana process has, to a larger extent, helped to revive the Geneva process which had been frozen for about nine months and has got rolling only since this January and we hail that.”
According to the Russian top diplomat, Moscow is working actively with United Nations Secretary General’s Special Envoy for Syria Staffan de Mistura, with the United States, the European Union, regional and off-region Islamic states. “Obviously, the most important thing is to organize direct dialogue between the Syrian government and the moderate armed opposition, i.e. between those who has been and are confronting each other in Syria with weapons in their hands,” he stressed.
He said that Russia has no objections against the political opposition representatives’, including immigrants’, joining the Geneva process. “By the decisive role should stay with those who are defending their principles with weapons in their hands on the ground but who are faithful to the Syrian state,” Lavrov underscored.
Final settlement
“First of all, it should be said that only the Syrian parties can and must do because the final settlement depends only on them,” he said. “It is recognized in the United Nations Security Council resolutions which clearly say that it is up to the Syrian people only to decide the future of their country while the international community, foreign players and neighbors are called to do their best to exterminate the terrorism threat and create maximum favorable conditions for the Syrians to sit down at the negotiating table to agree on how they will live in their country.”
“There are criteria that cannot be avoided or dodged during these talks, and this is committed to paper in the Security Council resolutions – that country should be democratic and secular,” Lavrov pointed out. “It is very important a number of oppositionists who pretend to be democratic categorically refuse to recognize commitment to secular character of the future state.”
Syria, according to the Russian top diplomat, should be a country “where people of any ethnic, religious or political groups enjoy equal rights and security and due participation in the political structure of society are guaranteed to all of them.” “These are general frameworks agreed by all and concrete formats of political settlement should be looked for within these frameworks,” Lavrov added.