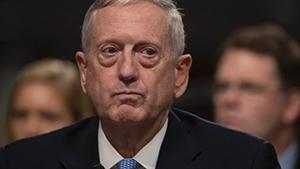 FoxNews.com
Defense Secretary Jim Mattis has chided the Pentagon for its “cavalier or casually acquiescent decisions to spend taxpayer dollars in an effective and wasteful manner,” cautioning the department that such missteps are “not to recur.”

The memo, obtained Monday by Fox News, highlights a June report by the U.S. special inspector general for Afghanistan (SIGAR) which found that as much as $28 million had been wasted by the Pentagon over a ten-year period on uniforms for Afghan soldiers with a camouflage pattern deemed unsuitable for the country’s predominantly desert terrain.
“These actions connect directly to our mission and budget situation,” Mattis said in a July 21 memo to the Defense Department’s acquisition, policy and finance chiefs. “The purpose of equipping the Afghan National Army is to bolster the Afghan Government’s capacity to provide for its own security, and ultimately, to help defend our country from a terrorist attack.”
The Defense Secretary goes on to state that, in his view, the SIGAR report not only “exposes waste” and “captures how funds were diverted away from other mission priorities” but also serves as an “example of a complacent mode of thinking.”
Mattis concludes the memo with a stern warning that such blunders must not happen again.
“This principle applies equally from the smallest procurement to the Department’s largest programs,” he added. “Rather than minimize this report or excuse wasteful decisions, I expect all DoD organizations to use this error as a catalyst to bring to light wasteful practices – and take aggressive steps to end waste in our Department. I’m counting on all hands to take effective action.”
The Afghan uniform debacle is slated to be a key topic of discussion on Tuesday during a House Armed Services Committee hearing.
The U.S has been involved in the seemingly intractable Afghanistan war for almost 16 years, with the deployment of several more thousand troops likely in the coming months.
Fox News’ Lucas Tomlinson contributed to this report.