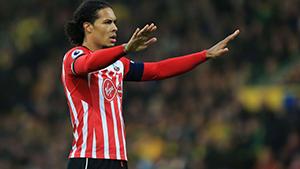 Virgil van Dijk is one of three Southampton defenders linked with a move to Chelsea in Tuesday’s edition of Paper Talk.

Chelsea are set to back Antonio Conte with another £150million this summer – in a spending spree which could include unsettled Southampton defender Virgil van Dijk.

Antalyaspor are ready to offer Jack Wilshere a chance to revive his career in Turkey after the midfielder was told he is free to leave the Gunners this summer.

Crystal Palace still want Liverpool defender Mamadou Sakho – but have been told they will have to meet the Reds £30million valuation to land him.

Leicester’s owners are determined not to allow Riyad Mahrez to quit the club on the cheap with owner Vichai Srivaddhanaprabha backing their hardline stance after a £20million offer from Roma was waved away last week.

Back Riyad Mahrez to remain at Leicester after this transfer window at 11/4 with Sky Bet!

Watford and Hull City are in a £8million fight over Liverpool flop Lazar Markovic.

Romelu Lukaku has revealed Paul Pogba used to drive him past Old Trafford in a bid to convince him to join Manchester United.
THE SUN

Pep Guardiola will go all out for £50million Alexis Sanchez as he looks to continue his record-breaking spree.

Back Alexis Sanchez to join Manchester City at 2/1 with Sky Bet!

Riyad Mahrez is facing the prospect of starting the new season with Leicester unless Arsenal can cough up at least £50million.

Lucas Perez has been offered a lifeline by Marseille and Bayer Leverkusen as they look to end his Arsenal nightmare.

Paris Saint-Germain have a contract waiting on the table for Neymar to sign, and the deal could be done “in the next few hours”.

Romelu Lukaku says it was Jose Mourinho and not Paul Pogba who convinced him to join Manchester United.
DAILY STAR

Liverpool have submitted a £74million bid for RB Leipzig star Naby Keita, having previously had two bids rejected for the 22-year-old.

Chelsea are keen to sign Southampton pair Cedric Soares and Ryan Bertrand after missing out on Danilo and Benjamin Mendy.

Back Ryan Bertrand to join Chelsea at 3/1 with Sky Bet!

Chelsea are also eyeing a move for Barcelona star Sergi Roberto and are willing to pay his £37.5million release clause.
DAILY EXPRESS

Real Madrid are determined to sign Kylian Mbappe from Monaco in a move that would spell trouble for Karim Benzema’s Bernabeu career.

Celtic have kicked off talks with Marseille over a £20million deal for striker Moussa Dembele.

Crystal Palace must pay up for Mamadou Sakho after Liverpool ruled out any possible loan move for the defender.

Mauricio Pochettino will give Vincent Janssen one more season to prove his worth at Tottenham after scoring just two Premier League goals last term.

Swansea are digging their heels in over their £50million Gylfi Sigurdsson valuation as Everton step up their interest.

Middlesbrough have offered Ben Gibson a new deal to ward off West Brom’s interest.
THE INDEPENDENT

Alexis Sanchez is ready to take less money from Manchester City to force through his Arsenal exit and a Pep Guardiola reunion.

Bayern Munich boss Carlo Ancelotti has admitted it is “a possibility” Renato Sanches will join Manchester United this summer.
THE TELEGRAPH

Chelsea will back Antonio Conte in a £250million spending spree on four more potential signings.
THE TIMES

Liverpool are set to put their Naby Keita pursuit on hold until next summer.