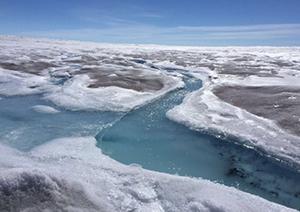 David Shukman Science editor
Scientists are “very worried” that the melting of the Greenland ice sheet could accelerate and raise sea levels more than expected.
They say warmer conditions are encouraging algae to grow and darken the surface.