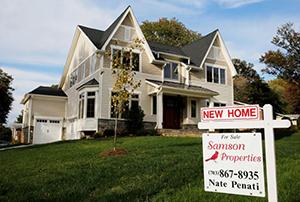 WASHINGTON (Reuters) – U.S. home resales fell more than expected in June as a dearth of properties amid strong demand pushed prices to a record high, keeping first-time buyers on the sidelines.

The housing market has experienced an acute shortage of homes for sale for about two years. As the labor market churns out more jobs and builders struggle to secure land, building materials and skilled labor, the situation could worsen.

Economists had forecast sales falling 1.0 percent to a 5.58 million-unit rate. Sales were up 0.7 percent from June 2016. The shortage of properties has led to bidding wars, culminating in house price increases outpacing wage gains.

There were 1.96 million houses on the market last month, down 7.1 percent from a year ago. Housing inventory has dropped for 25 straight months on a year-on-year basis.

The median house price jumped 6.5 percent from a year ago to an all-time high of $263,800 in June. It was the 64th straight month of year-on-year price increases.

The NAR, however, said the price surge did not suggest another housing market bubble was building, noting that the inflation-adjusted median price was below its peak in 2006.

Prices for U.S. Treasuries dipped, while the U.S. dollar rose slightly against a basket of currencies.
Supply Squeeze

Homebuilders are struggling to plug the inventory gap amid rising lumber costs. Homebuilding is also being hampered by shortages of labor and land.

A report last week showed housing starts rebounding 8.3 percent to a 1.22 million-unit pace in June, but still below their historic average of 1.5 million units, a rate realtors say would eliminate the housing shortage.

Housing likely subtracted from gross domestic product in the second quarter after contributing almost half a percentage point to the economy’s annualized 1.4 percent growth pace in the first three months of the year.

The Atlanta Federal Reserve is forecasting GDP rising at a 2.5 percent pace in the second quarter. The government will publish its advance estimate for second-quarter GDP on Friday.

The economy appears to have retained its momentum early in the third quarter, with a second report from data firm IHS Markit showing its flash manufacturing Purchasing Managers Index hit a four-month high in July.

Home sales in June fell in the Northeast, West and South regions, but rose in the Midwest. At June’s sales pace, it would take 4.3 months to clear the stock of houses on the market, up from 4.2 months in May. A six-month supply is viewed as a healthy balance between supply and demand.

Houses typically stayed on the market for 28 days last month, down from 34 days a year ago. The shorter market duration was concentrated in Seattle, Salt Lake City, San Jose, San Francisco and Denver. Demand for housing is being driven by a tight labor market, marked by a 4.4 percent unemployment rate, which is boosting employment opportunities for young Americans. But the tight labor market has not spurred faster wage growth.

Annual wage growth has struggled to break above 2.5 percent, an obstacle for first-time home buyers, whose share of home sales has barely shifted.

They accounted for 32 percent of transactions last month, well below the 40 percent share that economists and realtors say is needed for a robust housing market.

“Housing demand should hold up. However, we are not optimistic that the current inventory shortage will improve this year,” said Matthew Pointon, property economist at Capital Economics in New York. “Existing home sales will do no more than tread water over the next few months.”