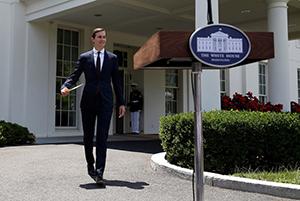 There were numerous attempts to establish contact with the campaign and the transition team.
Julia Ioffe

In trying to fend off suspicion of collusion with the Kremlin, Donald Trump Jr. and Jared Kushner have recently provided the public with two very interesting documents. Shoving responsibility for any outreach onto the Russian side, the two men have given us with a partial account of Russian methods in approaching the Trump camp in 2016.
If the accounts are true—and, given that their accounts have changed in the past, these latest accounts could change too—then, taken together, the Trump Jr. emails and Kushner’s statement show a Russian side that is experimenting with ways of getting the Trump team’s attention. They show a side that really is, as one former Obama administration official told me, “throwing spaghetti at the wall and seeing what would stick.”