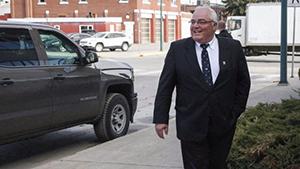 Two Canadian religious leaders have been found guilty of practicing polygamy by the Supreme Court of British Columbia (BC).

The trial heard Winston Blackmore, 61, married 24 women. His former brother-in-law James Oler, 53, married five.
They were both charged with one count of polygamy. Each face up to five years in prison.
The landmark ruling is considered a test of the boundaries of religious freedom in Canada.
“The Charter of Rights is the supreme law of Canada but we have to realise that the rights in the Charter are not absolute,” Wally Opal, former BC attorney general told CTV News following Monday’s ruling.
Blackmore and Oler are from Bountiful in southeastern BC, a religious community of about 1,500 people founded in 1946.
Both are former bishops with a breakaway Mormon sect, the Fundamentalist Church of Jesus Christ of Latter-Day Saints (FLDS).
Mr Blackmore was excommunicated from the FLDS in 2002 and replaced by Mr Oler.
The sect has branches in the United States, where it has about 10,000 members.
Polygamy is illegal under Section 293 of Canada’s Criminal Code. The Royal Canadian Mounted Police first began investigating the sect in Bountiful in the 1990s.
But attempts to bring the case to trial stumbled over a lack of legal clarity.
In 2011, the BC Supreme Court upheld Canada’s anti-polygamy law as constitutional following a request from BC’s government for a ruling on the issue.
It said the law was a reasonable restriction on religious freedoms in Canada.
The verdict on Monday is unlikely to be the final legal word.
Blackmore’s lawyer, Blair Suffredine, told the court he planned to launch a challenge to the anti-polygamy laws should his client be found guilty.
Legal experts suggest that the case is likely to eventually end up in the Supreme Court of Canada.