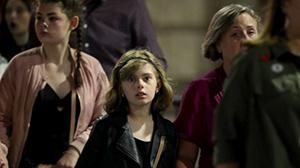 And they say countries facing terror threats must prepare to deal with attacks with chemical weapons such as sarin or mustard gas, and attacks targeted at “iconic victims” such as children or emergency care responders.

A group of French doctors have set out lessons learnt and advice for dealing with future terror attacks in a review in leading medical journal The Lancet, published on Wednesday.

After the terror attacks in November 2015, French paediatric surgeons realised they did not have enough experience treating the kind of injuries that could have occurred if the attackers had succeeded in their attempt to get a bomb inside the Stade de France.

“Emergency services realised that many children were present in the Stade de France and recognised that their ability to manage multiple paediatric victims was not optimal,” the doctors wrote.

The need for better training and preparation was confirmed in the Nice attack the following year – which took place in front of the Lenval Children’s Hospital, and saw several children suffering blunt trauma and taken directly to the hospital on stretchers.

“Even if staff were prepared to mass casualty incident, this scenario overwhelmed the medical resources of the children’s hospital,” the doctors wrote.

It led to “main gate syndrome” – where a sudden influx of casualties overwhelms a hospital’s ability to properly treat them.

In fact, most of France’s trauma centres were “not at all experienced when facing an overwhelming number of victims” with injuries such as those from high-velocity weapons.

Protecting hospitals against an attack was also a new challenge for health­care authorities.

“Health­care facilities are no longer sanctuaries but soft targets for terrorists,” the doctors wrote.

After the Paris attacks, France’s emergency medical services turned to the military for advice, they said. They adopted military expertise on pre-hospital damage control, and equipped first responders with battlefield supplies such as tourniquets and medication used to slow blood loss.

Even so, medical staff should “be prepared to observe early deaths” due to blood loss and this needed to be explained to staff and the general public.

The report also found that identification of victims “was clearly a deficiency during the Paris and Nice attacks”, particularly with those left dead at the scene of an attack.

There was immense pressure to provide timely answers for families looking for their relatives, and the involvement of international victims made it even harder.

The doctors also said a terror attack may require a “large mobilisation of psychiatrists and psychologists able to cope with acute stress”.

One third of people involved in a terror attack – victims, families and emergency workers – were likely to develop PTSD (post-traumatic stress disorder).

Of those who did, one third would not have recovered 10 years later.

The doctors recommended new research to investigate how PTSD can be prevented or treated.

In Paris, just around the corner from the Bataclan the day after the 2015 attacks, a psychiatrist told Fairfax he and three colleagues had spent all night treating scores of survivors at their post at the local municipal headquarters.

Dr Vincent Jardon said the victims had been “in a dream or in a nightmare – we try to put their two feet on earth”.

He said much of their work had been trying to prevent the victims developing PTSD, by listening to their stories.

“It may be done if you take action very early when people are still in an acute stage,” he said.

But it had also been tough for the workers.

“You can never prepare for something like this,” he said. “Nothing compares to this, it’s like a war – and I’m not a soldier.”

Another recent terror attack confirmed the challenges anticipated in France.

After the suicide bombing in Manchester in May, the city’s children’s hospital had to work with demands greater than most of its staff could remember, an intensive care consultant told Fairfax at the time.

Dr Peter-Marc Fortune said the hospital made a smart decision early on: not to wake all its staff immediately upon the report of the attack at an Ariana Grande concert, but to let many of them sleep, knowing they would have days or even weeks of intense work to come.

Dr Fortune said his hospital’s major incident plan had “swung into place” but this didn’t reduce the incredible workload and emotional rollercoaster to come.

There were also medical challenges – “a lot of us were seeing things that we’d only ever read about in textbooks”, he said.

And they also had to support a lot of devastated and grieving parents, some of whom were facing a long and difficult rehabilitation process for their child.