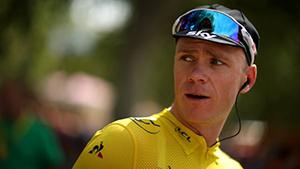 Chris Froome will not spend long celebrating his fourth Tour de France victory as he immediately eyes a second grand tour of the season.

Froome moved to within one of the all-time record of five Tour wins – jointly held by Jacques Anquetil, Eddy Merckx, Bernard Hinault and Miguel Indurain – but it is another piece of cycling history he fancies next.

The Vuelta a Espana starts in less than four weeks but Froome plans to be on the start line, bidding to become the first man to win two grand tours in the same season since Alberto Contador’s Giro-Tour double in 2008.

No rider has won the Tour-Vuelta double since since Hinault in 1978, when the Spanish race was still raced in the first half of the season.

Froome’s entire approach to this season and this Tour has been built around peaking later than usual, in the hope he can carry his form forward into the Vuelta.

The signs are certainly good given how he was able to contain his rivals in the last week of one of the closest Tours ever contested.

“This Tour has been my toughest challenge yet – the performance of my rivals has pushed me harder than ever before so I want to pay tribute to my rivals,” Froome said on the Champs-Elysees.

“We race hard against each other, suffer together, but the most special thing is the friendship and camaraderie in the peloton.”

But while the Vuelta is on his mind, so too is the chance to put his name alongside the four greats of Tour history.

“It’s a huge honour to be mentioned in the same sentence as Jacques Anquetil, Eddy Merckx, Bernard Hinault and Miguel Indurain,” Froome said. “It’s a privilege to be going for the record next year.”

Froome had effectively sealed victory in Saturday’s time trial in Marseille, so could enjoy the traditional procession into Paris on Sunday, clinking champagne glasses with his team-mates and sports directors as the peloton ambled towards the capital.

Once they reached the Champs-Elysees the fast men got to work, with Dutchman Dylan Groenewegen beating Andre Greipel in the much-anticipated sprint finish.

But the moment belonged to Froome, who was greeted at the finish line by his wife Michelle and young son Kellan.

“It’s just an amazing feeling,” Froome said. “The Champs-Elysees never disappoints. There’s something magical about it when you spend three weeks thinking of this moment.

“It’s amazing to see my wife and my son again after several months on the road. Each time I’ve won the Tour, it has been so unique. All my victories are so special in their own ways.

“This one will be remembered as the closest and most hard-fought of them.”