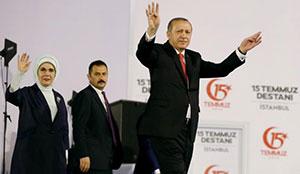 ByTM
Turkish President Recep Tayyip Erdoğan has slammed Germany, the Netherlands and the US for denying him and his ministers the opportunity to deliver speeches in their countries and said their “agents” would not be permitted to operate freely in Turkey.

Erdoğan, who was speaking during a group meeting of the ruling Justice and Development Party (AKP), referred to the arrest of six human rights defenders during a workshop at a hotel earlier this month and said: “You will not allow Turkey’s president or ministers the opportunity to speak in your country, but your agents come here and do as they please at our hotels. We will continue to crack down on their agents.”
Six human rights activists, including Amnesty International’s (AI) Turkey Director İdil Eser and German human rights consultant Peter Steudtner, who were detained on July 5 during a workshop at a hotel on İstanbul’s Büyükada, were put in pre-trial detention by an İstanbul court last week.
Erdoğan accused the human rights defenders of plotting a follow-up to a July 15, 2016 coup attempt.
“We see an incomprehensible attitude towards Turkey especially from the US, Germany and the Netherlands. They want only their interests to be on the table, and us to make sacrifices. While they are bothering our citizens there, they want their agents to do as they please in our country and us not to do anything. Excuse us, there is no more a Turkey like that…You either ally with us on equal terms, or you will receive a response to your every disrespectful act,” said Erdoğan.
A possible rally to be held by Erdoğan during the G-20 summit was not approved by Germany after a German veto of the entry into Germany of members of Erdoğan’s security detail who attacked protesters in Washington in May. The ban included a speech by Erdoğan at a Turkish consulate and its distribution as a video message.
The Dutch foreign ministry also said the visit of Turkish Deputy Prime Minister Tuğrul Türkeş or another Turkish minister to commemorate the anniversary of a failed coup attempt in Turkey last July would not be welcomed by the Netherlands.
Both Germany and the Netherlands refused to allow Turkish ministers and government officials to campaign there for an April 16 constitutional referendum in Turkey.
On May 16, members of President Erdoğan’s security detail engaged in a violent altercation with a group of protesters outside the residence of the Turkish ambassador in Washington while Erdoğan was paying an official visit to the country. At least 11 protesters were injured.
The Washington police department on June 15 issued a wanted list for 12 of President Erdoğan’s bodyguards as criminal suspects for their attacks on protesters on May 16. Erdoğan slammed the US decision to issue arrest warrants for his bodyguards and said he would initiate a political and legal battle against the warrants.