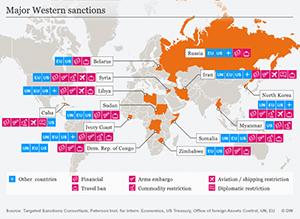 With the European Commission set to decide whether to impose sanctions on Poland for its efforts to take control of courts, DW takes a look at the decision-making process behind sanctions – and whether they’re effective.

Europe
From Russia to Syria and Iran: Do EU sanctions really work?

With the European Commission set to decide whether to impose sanctions on Poland for its efforts to take control of courts, DW takes a look at the decision-making process behind sanctions – and whether they’re effective.
Symbolbild Zange Sanktionen USA EU Russland (picture alliance/dpa)

Sanctions – or restrictive measures, as EU officials like to call them to make them sound less harsh – are one of the European Union’s main tools for achieving the objectives of the Common Foreign and Security Policy: peace, democracy, and respect for the rule of law, human rights and international law.

These sanctions are supposedly not punitive in nature, but designed to encourage a change in policy or activity. That pretty much translates to: coerce, deter, punish and shame entities that endanger EU interests or violate international norms, and support foreign policy efforts in counterterrorism, counternarcotics and nonproliferation.

– organizations such as terrorist groups

Clara Portela, a visiting professor at the College of Europe in Bruges, has written extensively about the effectiveness of sanctions. She said expectations of what sanctions can achieve were often too high or even unrealistic.

The EU commonly imposes selective sanctions, “but they can still have a big impact – they just need a longer time frame to be effective.”

Examples of countries that the European Union has active sanctions against show the effectiveness and pitfalls of such measures.

The focus is on human rights in Iran, where the European Union has placed travel bans and asset freezes on 82 people and one entity and banned exports of equipment that could be used for internal repression and equipment for monitoring telecommunications. However, these measures have had little or no impact on Iran’s human rights record.

On the other hand, crippling international sanctions imposed on Iran worked to force it to the negotiating table over its nuclear program. The sanctions targeted the country’s oil sector, including its ability to ship oil by taking measures to limit insurance of Iranian oil tankers. Critically, the sanctions also cut Iran out of international financial markets, including the SWIFT system.

These were some of the most comprehensive sanctions ever brought against any country, but what made them effective was that it was not just the EU and United States acting alone, but also key trading partners of Iran such as China and Russia.

“The European Union went quite far in that particular case because it stopped the supply of Iranian oil, which was quite detrimental to the economies of some of its southern member states,” Portela said. “The combined sanctions facilitated the rise to power of somebody who was a moderate, President Hassan Rouhani, as opposed to former President Mahmoud Ahmadinejad.”

In the absence of sanctions, Portela added, it’s unlikely that Iranian officials would have had any incentive to sit down to talk international powers to negotiate over its nuclear program. “So this is actually an example where sanctions have been effective,” she said.

In response to Russia’s annexation of Crimea and its perceived destabilization of Ukraine, the European Union imposed an asset freeze and travel ban on 150 people and 37 entities, accusing them of responsibility for “actions which undermine or threaten the territorial integrity, sovereignty and independence of Ukraine.”

The European Union has also limited access to EU capital markets for five majority-state-owned Russian financial institutions, as well as three major energy companies and three defense companies – forcing them to find much-needed capital elsewhere. The EU has also banned exports and imports in the arms trade and exports of dual-use goods that could have military purposes, and restricted access to certain sensitive technologies. As a result, Russia’s economy is struggling.

The EU has coordinated its sanctions policy with the United States to present a united front and make them more effective.

However, Portela said the sanctions against Russians were interesting “because they are generally believed to be ineffective.”
The reality, Portela said, becomes clearer in the bigger picture. “When the EU was trying to decide on the nature of the sanctions, the calculation was not about trying to bring about the total collapse of the Russian economy – something which would have created many more problems for Europe,” she said. “The idea was that they would inflict limited damage on specific sectors. So, the idea was to make the occupation of Crimea and the destabilization of Ukraine more costly. The financial sanctions have had quite an impact in the sense that the state has had to refinance the debt of banks running into trouble.” That is money that officials would rather have spent on something else.

Portela said the time factor was crucial in this and other instances. “In the case of (apartheid) South Africa, the sanctions were in place for over 20 years before they actually managed to be successful and the sanctions against Iran have also taken quite a while,” she said.

“The expectation is that over time the Russian population, even the elite, will be so fed up with declining living standards while other countries’ are actually growing,” she added.

The ongoing crisis in Syria has prompted international outcry and condemnation and naturally a long list of “red lines” and sanctions.

The sanctions currently in place against Syria include an oil embargo, restrictions on certain investments, a freeze of the central bank’s assets within the European Union, and export restrictions on equipment and technology that might be used for repression.

Portela said the problem with the sanctions on Syria was that they are “ill-suited to address the situation.”

“The situation is pretty unsuitable for sanctions to work because basically you have a civil war going on,” Portela said. “The EU actually went very far from the beginning. It pretty much deployed the entire sanctions toolbox in less than one year. Normally the EU imposes sanctions step-by-step.

“But, after a couple of years, they realized they had to backtrack on some measures. In this particular case, the EU went through a learning process in which it became clear that you don’t always have to impose an arms embargo first in order to address a conflict situation. And, in the case of Syria, they were simply too rushed.”

The European Union has restricted exports to Libya of certain goods that could be used for human smuggling and trafficking. Three leading political figures have been targeted for obstructing the implementation of the Libyan Political Agreement and the formation of a national unity government.

Portela pointed out that the decision to stop the supply of chemicals to Libya during the 1980s was not to force the Gadhafi regime to change its policies. “The idea was that it would make it more difficult [for Libya] to produce chemical weapons,” she said. “And, even in those cases in which it is clear that imposing sanctions will not make it impossible for them to pursue objectionable policies, at least it will increase the cost.”

Hungary is in the EU’s bad books and in theory could face discipline for what bloc officials call a “serious deterioration of the rule of law, democracy and fundamental rights.” Though sanctions are unlikely, the example could serve as deterrence for other countries in the heart of Europe – such as Poland.