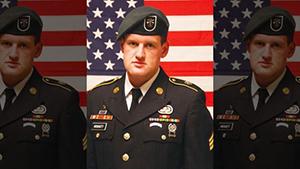 By Katherine Lam -FoxNews.com
A Jordanian military guard hunted down and ruthlessly killed three U.S. Special Forces soldiers as the men held their hands up in surrender, newly released video of the controversial November incident shows – contradicting the Jordan military’s original claim the American troops didn’t follow proper protocol when trying to enter the military base.

Security camera footage released Monday revealed details of the Nov. 4 shooting at King Faisal Air Base in southern Jordan where Staff Sgt. Matthew C. Lewellen, 27, Staff Sgt. Kevin J. McEnroe, 30, and Staff Sgt. James F. Moriarty, 27, were gunned down. The video had previously been shown to the families of the U.S. Army Green Berets.
Jordanian 1st Sgt. Marik al-Tuwayha is seen in the video firing at the four-vehicle U.S. convoy, continuing to pull the trigger even though the American soldiers desperately wave their arms in surrender during the six-minute gun battle. Two of the men get out of their vehicles and take cover behind a barrier – but al-Tuwayha keeps shooting.
Eventually, the Jordanian guard closes in on the men and guns them down. One U.S. soldier involved in the incident survived the attack.
The video doesn’t clearly reveal what prompted al-Tuwayha to open fire. The lack of sound in the video also makes it unclear what those involved were saying.
Spokesman Maj. Adrian J.T. Rankine-Galloway said the Pentagon was aware the video has been released and referred all questions to the Jordanian government.
“The Department of Defense respects the Jordanian judicial process and supports their efforts toward transparency and openness regarding this incident,” Rankine-Galloway said in a statement.
Jordan initially said al-Tuwayha fired at the U.S. soldiers because they failed to stop at the gate, claiming certain entry protocols were not followed.
The U.S. quickly disputed the claim and said it could not rule out a political motive, Reuters reported. An investigation later found the American soldiers “were acting in compliance with all procedures and accepted practices,” according to a U.S. Special Operations Command news release in March.
Jordan eventually changed its position and charged al-Tuwayha with premeditated murder. The guard pleaded not guilty and insisted he was acting in accordance with open-fire regulations. He said during his testimony he heard a pistol shot and feared the base was being attacked.
But the family of the slain U.S. soldiers said otherwise, referencing the surveillance video that was eventually released to the public on Monday. They said the video showed the defendant reloading and shooting at Americans who were waving their hands and yelling: “We’re Americans! We’re friendly!”
“We’ve felt discouraged and disappointed with every way Jordan has handled this case since the moment the bullets were first fired,” Moriarty’s sister, Melissa, told the Associated Press.
Last week, al-Tuwayha was sentenced to life in prison with hard labor. When the verdict was read, he shouted, “I only did my duty!”
Hundreds of people also protested the conviction, blocking the roads to al-Jafr by burning tires and staging a sit-in. Members of al-Tuwayha’s tribe claimed the Jordanian soldier was a scapegoat.
“People from our tribe, especially Marik, know nothing but the military, King Abdullah and God,” Sayel Abu Tayeh, a relative of the Jordanian sergeant, said. “That is all they have. Killing three souls is not a game to us.”
But the video appeared to be released Monday to counter those demonstrating. Jordan’s military said in a statement that Tuwayha “had acted against orders and military instructions and had not acted in self-defense.”
Fox News’ Lucas Tomlinson and The Associated Press contributed to this report.