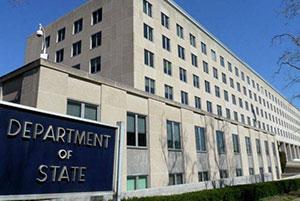 WASHINGTON, July 26. /TASS/. The United States would welcome Russia’s role in settling the diplomatic crisis surrounding Qatar, US Department of State spokesperson Heather Nauert told reporters on Tuesday.
“If Russia can play a role in helping to bring the sides to the table, I think we would welcome that. We might be skeptical of whether they’d be able to do that or not, but we would certainly welcome that if anyone were – be able to help bring those sides together,” she said at a regular press briefing.
Russian Foreign Minister Sergey Lavrov said in an interview with Kurdish Rudaw television on Monday that Russia was ready to assist in the settlement of the crisis around Qatar if the mediators deem it necessary. The Russian top diplomat added that Russia had “contacts with practically all participants in this conflict.”
On June 5, Saudi Arabia, the United Arab Emirates, Bahrain and Egypt accused Qatar of supporting terrorism and interfering into their domestic affairs and said they were severing diplomatic relations with that country. Economic sanctions and a transport blockade of the emirate followed.
On June 22, four Arab states advanced 13 demands to Qatar for restoring relations and gave it a 10-day deadline to comply with them.
Qatar’s government said that the demands were unacceptable as they had nothing to do with the fight against terrorism but aimed to limit the country’s sovereignty.
On July 5, the deadline expired, but Doha’s response handed via Kuwait was met with regret by the boycotting nations. They vowed to continue their political and economic pressure on Qatar until it changes its policy.