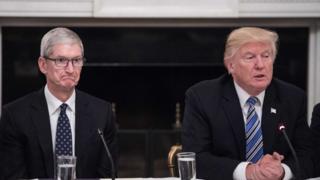 Apple’s boss has promised to build three new manufacturing plants in the United States, according to an interview President Donald Trump has given to the Wall Street Journal.

President Trump told the Journal he had a phone conversation with Apple’s chief executive Tim Cook.
“I spoke to (Cook), he’s promised me three big plants – big, big, big,” said President Trump.
Apple has declined to comment on the report.
President Trump told the Wall Street Journal during the interview that discussed a range of matters including tax reform, that Mr Cook had called him to confirm plans for the plants were “going forward”.
During the campaign last year, President Trump made repeated calls for American companies to produce more in the US in order to create jobs and revive the manufacturing sector. Apple was one of the companies that came under fire.
“We’re gonna get Apple to start building their damn computers and things in this country, instead of in other countries,” Mr Trump said in a speech in January last year.
Apple currently manufactures almost all of its products in China but the company employs developers and designers in the US and buys some of its parts from US-based manufacturers such as Corning.
A few products are also made by contract manufacturers in the US.
In May the Apple chief executive said the company was creating a $1bn fund to invest in advanced manufacturing in the US.
Foxconn, a major contractor for Apple, has said it also plans to invest more than $10bn in a display-making factory in the US, possibly in Wisconsin.