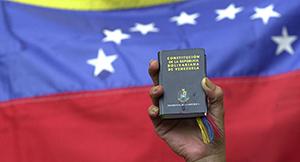 MEXICO (Sputnik) — Venezuelan Attorney General Luisa Ortega Diaz said Tuesday that the country’s authorities had violated the constitution amid ongoing political crisis and street protests.
“You can not continue to rule the country as if it were a personal thing. Venezuela is living a dangerous and dark moment (of its history). How long will the country tolerate a cruel violation of the constitution?” Ortega Diaz said at a press conference in Caracas.
According to the Prosecutor General, the country’s Supreme Court has become one of the main usurpers of power, taking over the powers of the National Assembly and the Attorney General’s Office itself, violating the main law of Venezuela.
Ortega Diaz herself is currently on trial, being suspected of committing illegal actions when performing her duties. She is prohibited from leaving the country and transferring property to management of third parties, all her accounts are frozen. The Attorney General’s troubles began after she opposed the authorities’ actions in the situation with more than three months of street protests and their intention to change the constitution.
Since early April, Venezuela saw mass protests after the decision of the Supreme Court to take over legislative powers from the opposition-controlled National Assembly. The top court reversed the ruling but the step did not stop the mass demonstrations. In May, the country’s president Nicolas Maduro announced his decision to call the National Constituent Assembly, which was regarded by the opposition as an attempted coup and resulted in further escalation of tensions that resulted in the deaths of about 100 people.