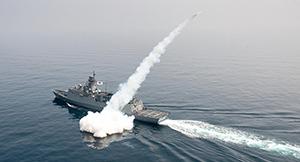 Seeking to increase the chances of taking out North Korean leader Kim Jong-un in the event of war, South Korea wants to boost its 500-mile range ballistic missile warhead from 1100 pounds to one ton.

By doubling the warhead size, Seoul asserts that it can mitigate the threat of nuclear attack by the People’s Democratic Republic of Korea (DPRK), and strike underground bunkers where the Pyongyang brass will hide in the event of war, according to the Korea Times.
But to make the dream a reality, Seoul must first get the approval of Washington, as an existing treaty between the allies describing guidelines for the country’s missiles prevents the kind of upgrades sought by the South Korean military.
A 2012 revision of the agreement permitted South Korea to fly its missiles farther than the 200-mile limit, up to some 500 miles, but no mention was made of increasing the weapons payload, cited by Korea Times.
Newly elected President Moon Jae-in, during a late June meeting in Washington with US President Donald Trump, remarked that the 2012 New Missile Guidelines would have to be updated.
Trump reacted positively to the request, according to reports, but officials in Seoul are hesitant to comment.
“The government will discuss the issue with the United States in the upcoming Security Consultative Meeting (SCM) and the Korea-US Integrated Defense Dialogue (KIDD) scheduled for later this year,” an unnamed source quoted by the Korea Times said.
South Korean Ministry of National Defense spokesman Moon Sang-gyun, in response to questions about the weapons payload upgrade, said, “It is not proper for me to mention things discussed by the heads of state of the two countries.”
“But I can say the military is reviewing various measures to effectively respond to North Korea’s evolving nuclear and missile threats,” he added.
Following the 2012 revision of the missile guidelines, South Korea now has the entire territory of North Korea in missile range.
After the treaty’s expected update to increase missile payloads to a one-ton maximum, Seoul’s warheads will be able to destroy bunkers up to 30 feet underground. Experts estimate that the DPRK has over 7,000 underground bunkers, including nuclear and missile facilities.
“If a payload of 1 ton can be loaded on a [500-mile] range missile, our military will be able to conduct the Korea Massive Punishment and Retaliation (KMPR) plan more effectively as the missile’s penetration capability will be seriously improved,” claimed an unnamed military official cited by the Korea Times.