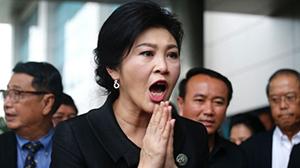 But Yingluck Shinawatra, whose fairytale leadership ended before generals toppled her administration in a 2014 coup, has denied speculation she intends to flee the country like her famous elder brother Thaksin Shinawatra, who has lived in exile for more than a decade.

“What I can say is that I’m still strong and ready to fight to prove my innocence,” she said in her latest Facebook post.

Ms Yingluck questioned a move by the military government in Bangkok to freeze her assets in relation to a US$1 billion fine imposed over one of her government’s policies to subsidise rice farmers, the latest in a barrage of legal battles she has fought since leaving office.

“The government has chosen to go ahead with it because they think they have the power to do whatever they want,” she said in rare public criticism of the government that censors dissent.

In a country where corruption is endemic, no evidence has been presented that Ms Yingluck took any money from the rice scheme, which in 2012 and 2013 cost Thailand billions of dollars.

But a state-appointed committee last year ordered her to pay a US$1 billion fine, finding she was to blame, even though it was government policy.

On Monday, Thailand’s Justice Ministry moved to freeze her bank accounts containing around US$18 million, and other assets.

Ms Yingluck immediately filed a court petition to revoke the action, saying it was unlawful and was intended to influence the country’s Supreme Court which on August 25 is scheduled is deliver its ruling on a charge that she was criminally negligent over the rice scheme.

The case could inflame anti-government sentiment among her supporters who see the charges as a political witch-hunt.

If convicted Ms Yingluck could face up to 10 years jail.

Prayuth Chan-ocha, Thailand’s prime minister who led the coup, warned Ms Yingluck’s supporters against coming out en masse to show their support for her at the court on August 25.

“People should think about what they will achieve by being there. No matter how many assemble or what happens, the outcome will not change,” he said.

The government has banned public gatherings of more than five people.

Ms Yingluck, a businesswoman and political novice before her three-year term as prime minister, was removed from office in early May 2014 – days before the coup – after a court found her guilty of abusing her office over a government appointment.

In 2015 the country’s military-stacked national assembly impeached her and banned her from political office over the scheme, which her government introduced after she had campaigned in 2011 promising to support the rural poor.

Observers at the time saw the scheme as her way of mimicking her brother Thaksin, who introduced popular expansionist economic policies in rural areas before he was ousted in a 2006 coup.

The plan was to buy up local rice harvests for as much as 50 per cent above market rates to drive-up global prices.

But the market saw it as a clumsy attempt at price manipulation.

Rice exporters such as Vietnam and India stepped up production while Thai exporters responded by investing in emerging produces such as Cambodia, Laos and Myanmar.

The government amassed huge stockpiles of rice rather than sell at a loss overseas.

Much of it rotted.

Mr Prayuth’s government has also claimed the scheme was riddled with corruption.

Ms Yingluck is scheduled to give her closing statement in her trial on August 1.

“I’ll be there in court until the end,” she said.