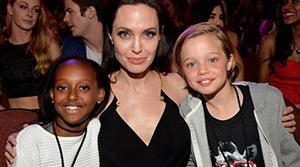 Bethonie Butler
Angelina Jolie is opening up about her life after filing for divorce from Brad Pitt last year. In an interview with Vanity Fair, the actress and film director talks about focusing on her children in the wake of their highly-publicized split.

It’s decidedly less revealing than the interview Pitt gave to GQ earlier this year in which he revealed that he had quit drinking and been listening to a lot of Frank Ocean. But it does offer a glimpse into Jolie’s life as a single mother, who admits to taking cooking classes at her kids’ request.

Jolie recently directed First They Killed My Father, a film adaptation of Loung Ung’s 2000 memoir about surviving the brutal Khmer Rouge regime, which was responsible for the deaths of nearly 2 million Cambodians. Jolie and Ung co-wrote the screenplay for the film, arriving on Netflix later this year.

Here are some more revelations from the interview.

– She says she and Brad Pitt are “working towards the same goal.”

Jolie told contributing editor Evgenia Peretz that in the summer of 2016, “things got bad” between her and Pitt, her partner of 12 years. “I didn’t want to use that word… Things became ‘difficult,'” she said.

Jolie wasn’t particularly forthcoming about their split, though she did hit back at rumours Pitt had grown wary of the family’s frequent travelling and wanted a more stable life for the children: “That was not the problem. That is and will remain one of the wonderful opportunities we are able to give our children…They’re six very strong-minded, thoughtful, worldly individuals. I’m very proud of them.”

Asked if her relationship with Pitt had improved since their very public separation, Jolie offered a careful response: “We care for each other and care about our family, and we are both working towards the same goal.”

– She puts on a brave face for her children, but cries in the shower

“I was very worried about my mother, growing up—a lot. I do not want my children to be worried about me,” she said. Her mother, Marcheline Bertrand, split from her father, the actor Jon Voight, when Jolie was young, after Voight’s alleged infidelities. “I think it’s very important to cry in the shower and not in front of them. They need to know that everything’s going to be all right even when you’re not sure it is.”

– She has reconciled with Voight

“He’s been very good at understanding they needed their grandfather at this time. I had to do a therapy meeting last night and he was just around,” Jolie said of her father, from whom she has been estranged for many years. “He knows kind of the rule: Don’t make them play with you. Just be a cool grandpa who’s creative, and hang out and tell stories and read a book in the library.”

– She was diagnosed with Bell’s palsy

Jolie was diagnosed with hypertension last year, as well as Bell’s palsy, a condition that disables the muscles on one side of the face due to nerve damage or acute inflammation. The actress said acupuncture had helped her fully recover from the condition. “Sometimes women in families put themselves last until it manifests itself in their own health,” she told the magazine.

Jolie has been open about her health struggles in the past. In 2013, she wrote a New York Times op-ed about her decision to have a double mastectomy after learning she carried the BRCA1 gene mutation, putting her at high risk for breast and ovarian cancers. Two years later, she revealed that she had undergone preventative surgery to remove her ovaries and fallopian tubes after a cancer scare.

– Her kids were involved with production on her upcoming film.

First They Killed My Father is clearly a project Jolie feels passionate about. The actress recalls purchasing Ung’s memoir for $2 in Cambodia, where she had filmed the 2001 blockbuster Lara Croft: Tomb Raider. Her experiences in Cambodia inspired Jolie to learn more about international issues, leading to many of the humanitarian efforts she continues today.

Cambodia is also where she adopted her now 15-year-old son, Maddox, who is a credited as a producer on “First They Killed My Father” and, as Jolie tells it, is largely the reason the film got off the ground in the first place. “He was the one who said, ‘It’s time to do it.'”

Vanity Fair reports that Jolie’s son, Pax, did on-set still photography, and her other kids “became close playmates with the child actors” in the film.

– Her children are ‘healing’

They have been, she said, “been very brave. They were very brave”. She added: “We’re all just healing from the events that led to the filing… They’re not healing from divorce. They’re healing from some… from life, from things in life.”

– Jolie is taking cooking classes because her children asked her to

“I’ve been trying for nine months to be really good at just being a homemaker and picking up dog poop and cleaning dishes and reading bedtime stories,” she said. “And I’m getting better at all three… I’m just wanting to make the proper breakfast and keep the house. That’s my passion. As I go to sleep at night, I think, Did I do a great job as a mum or was that an average day?”