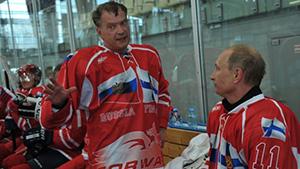 By Kevin Ponniah BBC News
Russian President Vladimir Putin is travelling to Finland at a symbolic time: the country is celebrating its 100th year of independence from Russia.

And the visit will be rich in symbolism.
Mr Putin will join his Finnish counterpart, Saulli Niinisto on Thursday in the picturesque lakeside town of Savonlinna – an area with plenty of history dating back to the Russian empire.
The pair will take in a Tchaikovsky opera put on by Moscow’s Bolshoi Theatre at a medieval castle, and go on a steam ship cruise on Lake Saimaa.
But despite the chummy optics, observers expect the pair to have honest conversations about prickly issues, including military tensions between Russia and the West in eastern Europe.
So where does Finland stand vis-à-vis its giant neighbour next door?
While Finland shares a 1,340km (830-mile) border with Russia, its present relationship with the country is vastly different from that of Moscow’s neighbours in the Baltics and Eastern Europe that fret publicly about Mr Putin’s agenda in the region after the annexation of Crimea in 2014.
Maintaining freedom from its powerful neighbour for a century has not been easy, and Finland has had to make sacrifices to survive.
It fought two wars against the Soviet Union between 1939 and 1944, and lost territory as a result.
During the Cold War, the somewhat derisive term “Finlandisation” was coined by West German scholars to describe how the northern European country adapted its policies to suit the Soviet Union while remaining officially neutral and keeping good ties with the West.
Finland played a difficult game during that period, acquiescing to the Soviet Union in many respects and not challenging it but maintaining its independence and political system.
Finlandisation is now commonly used to describe the situation when a small country allows its policies to be significantly influenced by a larger and more powerful neighbour.
But despite its namesake, the term does not apply to the Finland-Russia relationship of today. Analysts say Finland is friendly with Russia but remains hard-headed and realistic.
While Finland is not a member of the Nato military alliance that has sent thousands of troops to eastern Europe to reassure Poland and the Baltic states, it has been a member of the European Union since 1995.
This clearly situates it well within the West, says Suvi Turtiainen, a journalist with the Helsingin Sanomat newspaper, who is currently researching Russian perceptions of Finnish independence.
She says perceptions that Finland somehow sits in the middle between Russia and the West are misguided.
“Finland has always supported the sanctions against Russia [imposed in the wake of the annexation of Crimea], even though it has had a significant effect on the Finnish economy and despite Russian tourism being really important in the eastern region,” she says.
And it has been a close partner of Nato since the 1990s – sending troops to operations led by the alliance in the Balkans and Afghanistan, and maintaining a relationship that is now said to be as close as it can be without Finland officially joining as a member.
Yet at the same time “Finnish leaders and our current president want to keep dialogue with Russia, even through difficult times, and the dialogue is quite open and direct” including on the subject of Ukraine, says Ms Turtiainen.
Indeed, President Niinisto told Russia’s Tass news agency ahead of the visit that his communication with President Putin is “rather clear and frank”, with the pair able to “discuss anything”.
And there is a sense among Finnish people, that this balance – despite regional geo-political events – is working well.
A recent survey found that just 21% of Finns support joining Nato, while 51% oppose it, with the rest not giving an answer.
Finns will go to the polls next year to elect a new president but the Nato debate, while always present, will not be a major issue, says Markku Kangaspuro, a Russia expert at the University of Helsinki’s Aleksanteri Institute.
“[The] wide consensus between leading politicians is that it is not timely to discuss this issue,” he says. “Almost no one thinks it would [now] be time to apply as a member state.”
The Finnish public, he says, despite being alarmed for a time over Russian actions in Ukraine, now appear satisfied with the status quo.
One reason could be that the Kremlin has made clear that any move on Finland’s part to join Nato could invite a strong Russian response.
“What do you think we will do in this situation? We moved our forces back [from the border], 1500km away. Will we keep our forces there?” President Putin told a news conference during a visit to Finland last July, according to Euronews.
“How they assure the safety and independence of their own country is the Finns’ choice. Undoubtedly we appreciate Finland’s neutral status.”
Given widespread support for the existing state of affairs, Finland has not seen the same kind of political meddling that Russia has been accused of in many European states and the US, Mr Kangaspuro says.
“Russia probably doesn’t have any serious need or reason to try to interfere in our politics because our relations are as good as they can be in this situation.”